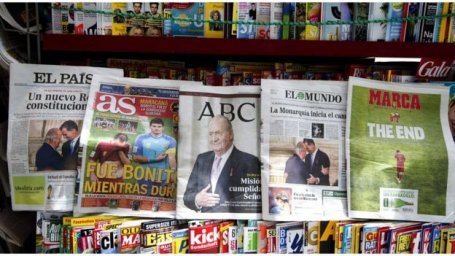 The El Mundo paper leads with more results of an opinion poll carried out for the paper, and the headline that 40 % of people consider there is a close relation between the ETA cease fire and the Catalan Statute.

The paper says that 59 % reject the placing of the term ‘nation’ in the preamble to the Catalan Statute and 68 % consider that the nationalists will not stop with the new Statute and will continue to demand more concessions.

El Mundo also repors that the Socialists have agreed a pact on the control of the airports, which means the Catalan Statute will go to a vote in the region as early as June. El Pais says that Zapatero is planning to make a statement to congress on ETA in June, if the cease fire holds. The paper says he plans to move ETA prisoners closer to the Basque region after that.

The Socialist party has also thanked the Victims Associations for what it calls their generosity and firmness, shown in a statement made by them over the weekend. La Razón says that the ETA cease fire will speed up the release of the ETA prisoners being held on remand. The paper says that nine prisoners have been released on mail since Wednesday’s announcement. The paper claims that 150 prisoners who have not been involved in killings could be released this year.

ABC has an interview with army boss General García González. He tells the paper that the army will know how to give an example to society following the ETA cease fire. He says that every military person will always remember those colleagues that have had to bury.

La Vanguardia leads with the King calling for ‘caution and a wait’ after the ETA cease fire. El Periódico says that Government is encouraging Batasuna, ETA outlawed political wing, to take part in democratic life. The paper says the Socialist party has suggested they start another party to leave violence behind.

ABC also reports an exchange of friendly messages between the PSOE and the PP ahead of the meeting between Zapatero and Rajoy tomorrow.

On the International stage, El Pais notes that the opposition to the Orange Revolution has won the elections in the Ukraine.

The paper also reports on success for the Merkel coalition parties in the regional elections in Germany.

El Pais gives prominence to the starting of the Artic Seal cull in the artic. 335,000 face death and the animal furs will end up in Russia and Asia, says the paper.

La Razón has an interview with Francisco Vázquez, Spain’s new ambassador to the Vatican. He says that he does not have a magic wand to solve all the problems between Spain and the Holy See.

The El Mundo photo is of Lorge Lorenzo who won the 250 cc category at the Jerez motorbike races yesterday. Two victories and a second place in Jerez, but seven die in bike accidents is the papers headline.

El Pais describes is as a triple victory and has a photo of 20 year old Dani Pedrosa. La Razón has the headline –‘Spanish passion in Jerez’ ABC also has a large photo and the caption ‘The Motorbike World Championship opens in Spanish colours’.

Barcelona paper La Vanguardia has a photo from the city’s marathon race yesterday. The paper also reports that doctors in Cataluña say they are swamped with work because of a lack of planning in the regional health service.

El Periódico reports that a new book reveals that the dancer Antonio is the father of the Duchess of Alba’s son.

And finally,
El Pais reveals to us that China now holds 19 % of the world’s monetary reserves…
And La Razón tells us that scientists in the United States have created a cholesterol-free pig.

spain, papers
—
Spain
RSS
No comments yet. Be the first to add a comment!
Log in or Register to write comments
Related news