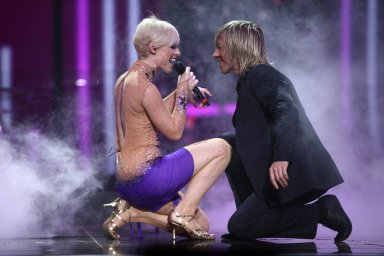 More than 700 entries have been submitted to the TVE Myspace Eurovision 2009: El Retorno, Spanish national selection so far in the past 2 weeks since it opened. More than 700 solo artists and groups have uploaded their song along with their presentation video. The number of entries submitted will surely grow as the deadline for the submission of songs in on the 17th of December.

Not all the entries that have been submitted will be elegible to compete as not all comply with the rules and regulations set by TVE. The official list of the competing entries will be announced on the 19th of December when online voting will kick off on the TVE official Spanish Eurovision webpage www.rtve.es/eurovision. The public will be able to vote for their favourite entries for a month, until the 19th of January. Soon after the Spanish broadcaster will announce the list of the 50 candidates with the highest voting results that will qualify to enter the Spanish Eurovision national final preliminaries. These 50 candidates will be the top 5 artists/groups with the highest results from each of the 10 different competing categories in the selection.

Already 700 entries have been submitted to the Spanish national selection, to their MySpace page.

The Spanish broadcaster TVE announced today that since opening the submission page already 700 entries have been sent it. Not all of them comply with the rules, though, they said. The most active region has been Madrid with 136 songs, followed by Barcelona with 53 and Valencia with 19.

TVE started the process on the 24th of November and will last till the 17th of December, the full list will be published 2 days later when the voting procedure starts on the broadcaster's website. This will last till the 19th of January when the 50 finalists will be revealed. All of them will participate in the selection shows.

You can still send your song in at this site, that is if you're of Spanish citizenship or have a proven residency there for at least 2 years.

eurovision, spain, songs, tve
—
Spain
RSS
No comments yet. Be the first to add a comment!
Log in or Register to write comments
Related news