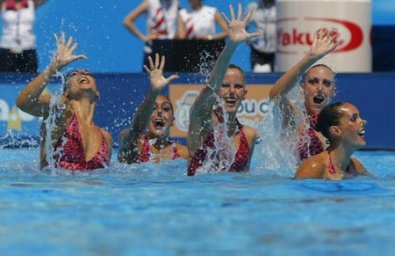 Taking advantage of Russia's absence, the Spaniards put together a high-energy routine that received scores ranging from 9.7 to 9.9 for a total of 98.333 points. China took the silver with 97.667 and Canada claimed the bronze with 96.167.

The Spaniards fired the crowd up by performing to «Stairway to Heaven,» even breaking out a little air guitar on another sweltering day at the Foro Italico.

«We have been working on the choreography for a long time and we have introduced a few changes since last week, particularly in the first part of the routine,» Henriquez said. «It's a very new exercise and I am very happy that the crowd loved it.»

Spain has struggled to get beyond second place in synchro. At the last world championships in Melbourne two years ago, the country earned four silvers and two bronzes — but no gold. It was the same story at the Beijing Olympics, where the Spaniards took silver behind the Russians in both events.

The trend continued in Rome, with Spain settling for silver in the first three events, each time behind Russia. But the sport's dominant nation didn't enter the free combination, finally providing a little drama.

Then again, in a sport where the hierarchy often seems set even before the competition begins, it was to be expected that Spain would take over with Russia on the sideline.

Nevertheless, it felt good to stand on the top step of the podium for a change.

«I would say it is a historical moment for the Spanish swimming team,» Raquel Corral said. «We think this is a marvelous sport which has a lot of future in Spain.»

China was eager to move up, too.

«We are very satisfied with this silver,» Zhang Xiaohuan said. «As Russia were not competing, we knew this was a big chance for us to get a medal. It all depended on Canada's performance. We could not hope for anything better than this.»

The home Italians had their second fourth-place showing of the championships, losing out to the Canadians by a half-point.

Canada, which was shut out of the medals at the last three world championships, earned its second medal in Rome. Marie-Pier Boudreau-Gagnon won bronze in the solo technical.

«Canada have come back,» Sandy Gill said. «We are so happy.»