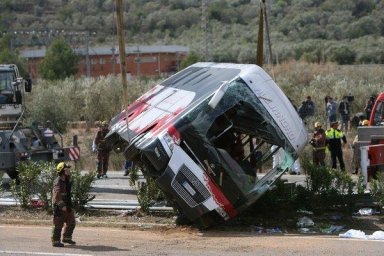 A tour-bus has crashed near Barcelona in north-eastern Spain, killing at least six people and injuring about 40.

Most of the casualties were reported to be Dutch tourists.

The crash happened at about 2310 (2110 GMT) on Thursday at Sant Pol de Mar. Spanish media say the bus left the road on a bend, hit a car and overturned.

The Spanish driver of the bus was among those seriously hurt. The injured are being treated in hospital. It is not yet clear what caused the crash.

The driver has been working for the bus company for 16 years and an alcohol test on him proved negative, the manager of the bus firm Plenacosta, Pere Artau, told the Spanish news website El Mundo.

The tourists had been on a day trip to Barcelona.

tour-bus
—
Spain
RSS
No comments yet. Be the first to add a comment!
Log in or Register to write comments
Related news