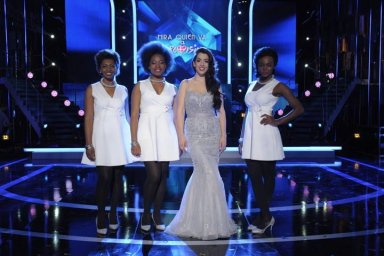 It was a very exciting show tonight in Barcelona with a nail biting ending between the two favourites, Brequette and Ruth Lorenzo, which ended in a tie between the two. The televoting winner prevailed making Ruth the Spanish representative in Copenhagen at the 2014 Eurovision Song Contest with Dancing In The Rain.

The entry of Spain at the 2014 Eurovision Song Contest has just been chosen in a televised final held in Barcelona tonight. The show called Mira Quién Va A Eurovisión was conducted by Anne Igartiburu.

These were the five hopefuls in the order of appearance of the show (click on the titles to listen to the songs):

Ruth Lorenzo was heavily tipped to be the Spanish choice before the announcement of a public selection. Mostly unknown in Spain, she finished in the top 5 of the UK's X Factor in 2008 with Dannii Minogue as her mentor. After trying to break it in the difficult British market she came back home and has just signed with a new record company aiming to reach not only the Spanish market but the international one too.

Ruth appeared on stage tonight wearing a mermaid like outfit which was referenced in the show with a little mermaid character, a tribute to Copenhagen's most popular sight, and also with a present for Ruth from her family: the original vinyl of The Little Mermaid soundtrack which she thought she had lost when moving to the US with her family as a child.

Earlier in the week Dancing In The Rain peaked at #1 in the Spanish iTunes singles chart. A first for a Eurovision Song Contest entry before being chosen. Her new adventure couldn't start better with this victory at the Spanish final.

Spain won the Eurovision Song Contest at London's Royal Albert Hall in 1968 followed by a home victory in 1969. Ruth Lorenzo will participate in the Final in Copenhagen on the 10th of May to make Dancing In The Rain the 54th Spanish entry.

Ruth Lorenzo, Dancing in the rain, Eurovision
—
104
Spain
Tweet
RSS
No comments yet. Be the first to add a comment!
Log in or Register to write comments
Related news