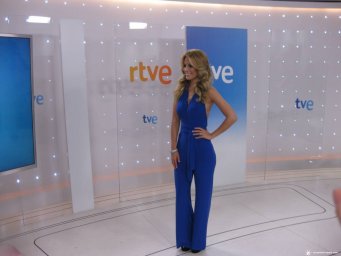 Spainsh pop singer Edurne will represent Spain the Eurovision Song Contest 2015, it was announced on Wednesday, in a press conference that had to be brought forward because the news was leaked online — by none other than the singer herself.

Edurne García Almagro, known professionally as Edurne, rose to fame in 2005 after appearing on TV talent show Operación Triunfo and has made a name for herself in Spain as a singer, actress and TV presenter.

Her most famous song is 'Despierta' (Wake up), which reached number five on the Spanish charts in 2006.

Her entry in Eurovision 2015, which will be held on May 23rd in Vienna, will be Amanecer (Daybreak) and will be sung entirely in Spanish.

The popstar was revealed as the Spanish face of Eurovision during a press conference held on Wednesday on Spain’s public broadcaster RTVE.

The press conference had to be brought forward after the name of Spain’s official entry was leaked online by none other than Edurne herself.

The singer posted on her Facebook page that she had been chosen to represent Spain in the Eurovision Song Contest before the official announcement had been made, according to Spanish newspaper, La Vanguardia.

Edurne described the song, Amanecer, during the press conference as being in: «a completely different style to anything Spain has ever done in Eurovision» and described the genre as «quality pop».

The singer is currently in the middle of recording the song and it has not been revealed when it will be released to the public.

TVE's director of programming, Ignacio Gómez-Acebedo, also revealed that this year, the station would broadcast both semi-finals live for the first time to 'create expectation' among viewers.

Last year's Eurovision Song Contest, in Copenhagen was won by Austria's Conchita Wurst with 'Rise Like a Phoenix', a victory which brings this year's competition to Vienna, where the singer will join the contest's presenting team, bringing viewers all the latest behind the scenes updates from the green room.

Edurne, 29, was one of the competitors on Operación Triunfo – the precursor to The X-Factor in the early 2000s – who went on to enjoy several years of success in the music world following her stint on the programme.

Her self-titled first album was released by Sony Music in 2005 and went gold almost immediately, but her second studio CD, Ilusión, was not promoted so heavily and enjoyed less success – then her third, Première, in 2008, only got to number 39 in the album charts.

Edurne’s life as a pop star fizzled out soon afterwards, but another door opened for her as a TV presenter and she hosted shows such as ¡Más que baile! (‘More than dance!’) in 2010 and Tu cara me suena (‘Your face looks familiar’) from 2013 to 2014.

She co-presented the programme Todo va bien (‘it’s all going well’) until recently alongside Top 40 radio DJ Xavi Rodríguez, and in recent months her old ‘hat’ as a singer has been gradually worn more and more often, with a new album rumoured to be hitting the shelves some time this year.

The Madrid-born former veterinary student, romantically linked to premier league footballer David de Gea, is described as ‘down to earth’ and ‘very modest’, and still hangs out with the same friends she had before she became famous.

“Representing Spain at the Eurovision is not to be sniffed at – it means there’s a chance of going international,” reveals Edurne, who is slightly daunted, but simmering with excitement, at the chance.

Her song for the show, Amanecer (a noun and a verb meaning ‘sunrise’) is entirely in Spanish and will be included on her forthcoming album.

It is written by Tony Sánchez-Ohlsson, co-author of the dramatic, romantic ballad sung by Pastora Soler, now 35, in 2012 and which reached 10thplace, Spain’s best result in decades.

But Edurne insists her track, which she says ‘got her right inside’ and which she ‘fell in love with’, is nothing like anything Spain has presented before at the international pop contest.

“We’re going to be brave and do something different – this is quality pop,” Edurne says, cryptically.

As yet, the track has not been heard outside the studio and will remain top secret for another two to three weeks at least.

Edurne’s favourite Spanish Eurovision entry in the last few years is none other than Pastora Soler, both because of the song written by the same composer who has put together Amanecer, and because of the mise en scène including costume, setting and special effects – a complete package this year’s contestant describes as ‘perfect’.

And in fact, the show by Pastora Soler – who has recently announced, with great sadness, that she is giving up her 20-year music career because of serious stage fright which gives her panic attacks when she faces the public – did far better than many other competitive and carefully-crafted acts Spain has put on in the last decade.

Last year saw Ruth Lorenzo singing Dancing in the rain in English and in Spanish and ending up very near the bottom – and although she laughed it off she was disappointed not to have gained more votes from the UK, given that she came fourth in the British version of The X-Factor and only missed out on a better result because of her duet with Britney Spears being a flop.

The previous year, 2013, brought long-running chart trio El Sueño de Morfeo into the limelight – fronted by singer Raquel del Rosario, ex-wife of Spanish Formula 1 double champion Fernando Alonso, the group has always been instantly-recognisable by its fast-paced pop with a heavy Celtic influence, a nod to their home region of Asturias.

But their Eurovision entry was slower, more dreamy and set against a backdrop of a green coastal clifftop with a loose grey horse galloping, its mane fanned by the wind.

Their entry came second from bottom.

The same fate met the spoof rapper Chikilicuatre, in 2008, with his Elvis-style turnout and highly-amusing lyrics – although the latter were lost on the rest of Europe, being in Spanish, meaning the most imaginative and fun part of the entire show disappeared entirely in front of the international voters.

If 2014’s Eurovision proved any point at all, it was that the artist him or herself and the show he or she presents is worth even more to the voting public than the actual song, and especially if it contains a social message which transcends language barriers.

Conchita Wurst, Austria’s ‘bearded lady’, could have been any other beautiful, long-haired woman in a flowing white dress were it not for her very conspicuous masculine trait – and in real life, ‘she’ is a young man, a transvestite who identifies as ‘gender fluid’.

Although his sexual orientation was never revealed, ‘Conchita’ was hailed as an icon for homosexual and bisexual visibility, not just that of the transgendered or transvestite population, and was considered ‘one in the eye’ for Russia which had come under fire for its exceptionally rigid legislation concerning the gay and lesbian public.

Indeed, whilst Russian votes for Austria were notably absent, and a huge crowd bearing rainbow flags booed the former Soviet nation whenever its artists performed, Conchita scooped up the 10s in droves and ensured Vienna would be the 2015 host city.

But Edurne García has not yet mentioned any detail about her setting, costume or theme – only the song itself, which she is determined will attract Europe-wide votes.

Edurne García Almagro, Amanecer, Eurovision
—
Spain
RSS
No comments yet. Be the first to add a comment!
Log in or Register to write comments
Related news