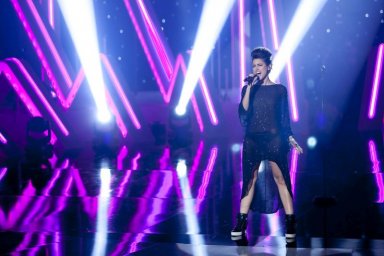 We already have representative for Eurovision 2016: Barei. The singer of «Say Yay!» Has managed to be the favorite of the public and the jury composed by Edurne, Loreen and Carlos Marin… You already have your ticket to Stockholm!

His song is the only one with lyrics written entirely in English. And is that the artist is convinced that it has an international theme that can be liked in Europe.

First press conference as representative of Spain for Eurovision 2016

Barei raved last night in Eurovision, a triumph that she described as a «turning point» in her career. And is that in a matter of hours has gone from being an independent artist and with little media coverage to be the candidate of Spain for Eurovision 2016.

«It is not easy to make your music sound on the radios and of course Eurovision is a before and after in my career», confessed the singer from Madrid in his first press conference as representative of Spain at the Festival. In three months he will be singing before more than 120 million viewers from around the world in the final of the Eurovision Song Contest, which will be held in Stockholm on 14 May.

«What I liked most was my attitude»

The singer has seen to the press the performance of last night in Eurovision Objective. «What I liked the most was the attitude.I thought I had a good time and it was like that.Maybe for a moment I thought more about having fun with my voice and now I'm going to work hard to make up for that,» she said.

He also talked about his now famous dance, which he describes as «very his own and something different». One more ingredient that helped him feel free on stage and move the party spirit of his song to the stage. And already has advanced that for the Eurovision final wants to wear this same spirit and we will see again with sneakers, because with the heels could not move freely.

And now, for the video clip

His next move to Stockholm is to record the 'Say Yay!' Music video. «Today I want to contact the director who has made my last video clips, although 'Say Yay!' I think of it with more exteriors and a bit in the style of the video clips of Bruno Mars, „he explained.

He has also hinted that in the last few hours he has received some offer from record companies. Meanwhile, enjoy your triumph and made it clear that your 'Say Yay'! Will sound entirely in English in Estocolomo for what would be the first time that Spain participates in the festival with a 100% theme in English.

“Salva Beltran's was the most authentic subject»

The singer has dedicated very good words to her colleagues in Eurovision Objective and has stressed that the international jury gave its maximum vote to Salva Beltrán.

«It was the most authentic, a true Spanish theme, I always advocate for truth, that is art, a way of escape and expression,» he says. And he adds: «That's why I was very happy that the international jury bet for him.»

Barei, Say Yay!, Eurovision, Spain
—
Spain
RSS
No comments yet. Be the first to add a comment!
Log in or Register to write comments
Related news