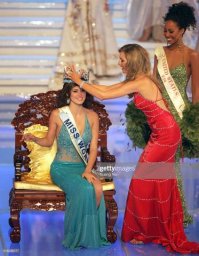 The winner of the Miss World 2004 contest was María Julia Mantilla García. She was chosen from 15 finalists. The competition was attended by girls from 107 countries.

The winner of the Miss World 2004 contest was 20-year-old Peruvian María Julia Mantilla García. She was chosen from 15 finalists, and in total girls from 107 countries of the world participated in the competition. The new “Miss World” – 20 years. She is from the small town of Trujillo in the north of Peru. Now the girl is receiving a pedagogical education, but is thinking about a career in tourism; three years ago, one became the champion of the country in triathlon and pentathlon.

In second place is the 18-year-old representative of the Dominican Republic. The third was the 24-year-old Miss USA, who was considered the favorite by many London bookmakers.

Russian contender “Beauty of Russia 2004” Tatyana Sidorchuk was also among the 15 finalists.

In addition to the above-mentioned girls, the representatives of the Philippines, Trinidad and Tobago, Poland, the Czech Republic, Vietnam, China and Nigeria went to the finals.

The finale of this prestigious competition is held for the second year in China, in the city of Sanya on the island of Hainan, it will be held here next year. Until 2003, beauty contests in China were banned. In 2002, the organizers of the contest had to abandon their intention to hold it in Nigeria, as these plans provoked sharp rejection by Muslim radicals and led to bloody clashes.

This time, for the first time in history, not only members of the jury voted for the beauties, but also the viewers. They could realize this right through the Internet, as well as through phone calls, SMS messages and pressing a button on the remote control of a digital TV. 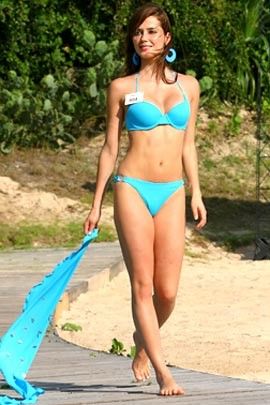 The third place was taken by a girl from the Dominican Republic, Claudia Julissa Cruz Rodríguez.

The new “Miss World” is 20 years old. She is from the small town of Trujillo in the north of Peru.

Now the girl is receiving a pedagogical education, but is thinking about a career in tourism. Maria wants to help her city become a major tourist destination. The fact is that in Trujill there is a unique historical monument Chan Chan – a city built of sand.

The assets of the new “Miss World” and sports achievements – three years ago, one became the champion of the country in triathlon and pentathlon.

In her free time, the most beautiful girl in the world loves to draw, go to the cinema and dance. Maria professionally dances the popular Peruvian dance of the Mariner.

The champion of Peru in modern pentathlon won the Miss World 2004 title.

Miss World, María Julia Mantilla García
—
122
Spain
Tweet
RSS
No comments yet. Be the first to add a comment!
Log in or Register to write comments
Related news

Kabaeva kicks off the World Cup