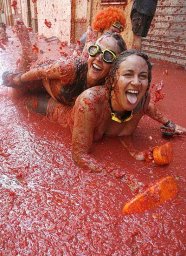 Revelers pelt each other with tomato pulp during the annual La Tomatina festival in Bunol, Spain.

Did somebody say food fight?

The world-famous La Tomatina festival in Bunol, Spain, got underway Wednesday, and from the looks of it, things got delightfully messy as usual.

During La Tomatina, giant trucks roll into town and deliver scores of rotten tomatoes, which revelers grab, smash and throw at one another in an epic battle that leaves everyone — not to mention nearby buildings and city streets — covered in juicy red tomato guts.

Many participants come prepared for the carnage in swimsuits, giant goggles and even costumes — but let's face it, there's no getting around 100 tons of tomato pulp.

La Tomatina dates back to the mid-1940s. Its origins are unclear, but local lore holds the fight began as a spat between local merchants, or a tribute to the practice of disgruntled citizens throwing tomatoes at politicians.

The small city of about 9,000 gets a boost of about 40,000 people during the festival, which is held on the last Wednesday of August each year and draws tourists from as far away as Japan and Australia.


Thousands of revellers pelted each other with tomatoes today in honour of the Spanish town of Bunol's annual Tomatina festival.

Over 40,000 took part in celebrations that saw the town's streets run with rivers of red pulp.

The tradition, which began in 1945 as a food fight between childhood friends, has become something of a calling card for Bunol, which is 25 miles (40km) north of Valencia. The annual event, which takes place in the central plaza, now attracts thousands of revellers from all over the globe, and this year's was no exception, with festival-goers from as far afield as Japan and Australia.

Tomatoes are provided by the local town hall and rules stipulate that in the interests of health and safety, the tomatoes must be squashed before throwing them — to avoid hurting people. Painting the town red: Bunol's streets were flooded with tomatoes during the annual festival Summer fling: Over 100,000kg of the fruit is estimated to have been thrown, squashed and trampled on

A firecracker is let off to announce the start of the fight, and a second is sounded to declare the end. Tomatoes can only be thrown between the two blasts.

Over 100,000kg of the summer fruit is estimated to have been flung, squished and trampled on.

The hour-long battle is so popular that traffic into the town was backed up nearly two miles (3km) earlier this morning. Messy business: A little girl is carried away after taking part in the Tomatina festival

La Tomatina start with an event called ‘palo jabon’. The goal of this event is climb a greased pole and drop ham from it’s top. Once someone from the group of participants succeed in this event authorities gives signal for the start of tomato fight. Water from trucks also being fired into the air from all corners of the street. At that time number of trucks will arrive at the street and provide tomatoes in abundance. Tomatoes for this festival are imported from Extremadura, one of divisions of Spain. The week long La Tomatina festival also features music, dance, parades and fireworks.

La Tomatina is a festival that is held in the Valencian town of Buñol, a town located in the East of Spain 30 km / 19 miles from the Mediterranean, in which participants throw tomatoes and get involved in this tomato fight purely for entertainment purposes. Since 1945 it has been held on the last Wednesday of August, during the week of festivities of Buñol.

The tomato fight has been a strong tradition in Buñol since 1944 or 1945. No one is completely certain how this event originated, but there is one popular theory that disgruntled townspeople rioted and attacked city councilmen with tomatoes during a town celebration. Whatever did happen to begin the tradition, it was enjoyed so much that it was repeated the next year, and the year after that, and so on. Other theories include a food fight among friends, a juvenile class war between bare-footed Trotskyist macarras and upper class pijos from Madrid on summer vacation, a volley of tomatoes from bystanders at a carnival parade, a democratic protest against the city council and the ensuing aftermath of an accidental truck spillage. The holiday was banned in the Spanish State period under Francisco Franco for having no religious significance, but returned in the 1970s after his demise. In 1957, demand for the popular festival led to its becoming official, with certain rules and restrictions. These rules have gone through many modifications over the years.

Another important landmark in the history of this festival is the year 1975. From this year onward, «Los Clavarios de San Luis Bertrán» organized the whole festival and brought in the tomatoes, which had previously been brought by the local people. Soon after this, in 1980, the town council took over responsibility for organizing the festival.

La Tomatina, festival, Bunol
—
163
Spain
Tweet
RSS
No comments yet. Be the first to add a comment!
Log in or Register to write comments
Related news