Kabaeva kicks off the World Cup 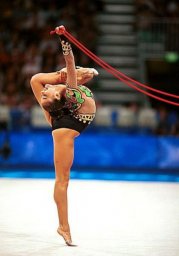 The Russian team was placed from the first rotation to the front of the provisional classification of the Worlds of Rhythmic Gymnastics that began in Madrid and already surpasses in 5,875 points to Bulgaria and in 6,300 to Ukraine.

The current individual world champion, Russian Alina Kabaeva, was the best of the 97 participants after they all did their first exercise and scored a 28,500 with the hoop. Second was also the Russian Irina Tchachina (27,900) and third the Bulgarian Simona Peycheva (26,700). In this way there are three Russians among the first four classified.

After the second round everything remained the same, with the Russians wanting to revalidate their throne of two years ago in Osaka and the Ukrainian, great rivals of the Russians and that, after the first rotation, they were doing their best to get the Second place to the detriment of the bulgaras.

The Victorian, Almudena Cid, who in the first exercise used her favorite device, the rope, was in charge of animating the rainy Madrid morning. With a brilliant exercise, where the rope pickups after the throws and the elements of greater difficulty managed to perform them perfectly, he put the joy, which was reflected in his face, with the music of 'Safri-duo' and based on drums Got the best score of the nationals with a 24,725.

Still the surprise was given by the other two Spaniards, who were among the top 30, Jennifer Colino (nineteenth) and Carolina Rodríguez (twenty-third).

Carolina Rodríguez was the first Spanish to participate and noticed the inexperience in an international competition. The Leonean gymnast made mistakes that lowered the note of the composition and had important failures in the collection of the rope, which cost him to add only 23,100 points.

However, despite her youth one of the pleasant news was to see the good exercise that made the Madrid Jennifer Colino, who at 16 years seemed not to notice the pressure of being a World Cup.

This Thursday, will be played in the afternoon one more rotation and on Friday the remaining two, after which will know the world champion team and the finalists of the individual competition, with a maximum of two per country.

Alina Kabaeva, rhythmic gymnastics
—
Spain
RSS
No comments yet. Be the first to add a comment!
Log in or Register to write comments
Related news