Miki will present Spain at Eurovision 2019 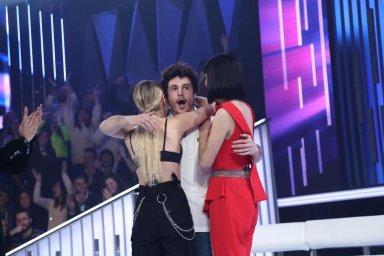 The representative of Spain at Eurovision 2019 was singer Miguel Núñez Pozo (Miki) with the song La Venda.

The opportunity to take part in the song contest with Mika appeared after winning the Spanish national selection for Eurovision 2019 under the name Operación Triunfo.

A total of 10 songs competed in the national selection of Spain at Eurovision 2019.

Singer was born in January 1996 in the city of Barcelona (Spain).

In parallel with the study of administration and management, the young musician took guitar and piano lessons.

Before starting a solo career, Miki was part of the Dalton Bang band that performed cover songs. With her, the singer often performed in Catalonia. In 2018, Miki became a participant in a talent show called Operación Triunfo, which also selected participants for the Eurovision song contest. And the song with which he won the national selection was written by a member of the group La Pegatina, whose work Miki admires.

One of the first traditionally makes the decision and Spain — the country — the participant of the «big five», that is, one of the organizers of the show.

During the national selection for Eurovision, which ended the day before, 23-year-old singer Miki was named the representative of Spain at the competition. In Tel Aviv, he will perform the fiery song La Venda («Blindfolded»).

Miki, La Venda, Eurovisión, Miguel Núñez Pozo
—
125
Spain
Tweet
RSS
No comments yet. Be the first to add a comment!
Log in or Register to write comments
Related news