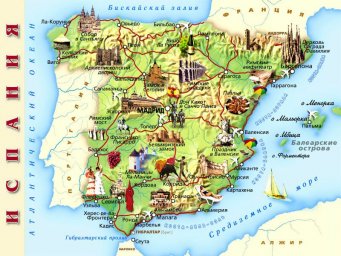 Spain, officially the Kingdom of Spain (España, Reino de España), is a country located in Southern Europe, with two small exclaves in North Africa (both bordering Morocco). Spain is a democracy which is organized as a parliamentary monarchy. It is a developed country with the ninth-largest economy in the world. It is the larger of two sovereign states that make up the Iberian Peninsula — the other is Portugal.

To the west, Spain borders Portugal, to the south, it borders Gibraltar (a British overseas territory) and Morocco, through its cities in North Africa (Ceuta and Melilla). To the northeast, along the Pyrenees mountain range, it borders France and the tiny principality of Andorra. It also includes the Balearic Islands in the Mediterranean Sea, the Canary Islands in the Atlantic Ocean and a number of uninhabited islands on the Mediterranean side of the strait of Gibraltar, known as Plazas de soberanía, such as the Chafarine islands, the isle of Alborán, the «rocks» (peñones) of Vélez and Alhucemas, and the tiny Isla Perejil. In the northeast along the Pyrenees, a small exclave town called Llívia in Catalonia is surrounded by French territory.

There are several competing hypothess as to the origin of the Roman name «Hispania», the root of the Spanish name España and the English name Spain. These hypothesis are built on the slenderest of evidence and so must be treated as merely speculative.