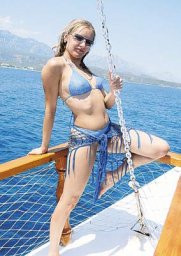 At present, the economy of many countries of the world is characterized by a strong growth of the tourism sector. The well-being of the population, the increase of free time and the development of transport are the causes that stimulate many people to travel. The Spaniards also go on vacation. They do it massively in August.The large cities are semi-deserted and some activities are almost paralyzed.

Tourism activity has made Spain the leading world power in this sector. Tourism contributes almost a tenth of the Gross Domestic Product. It is the most stable source of income for the Spanish economy.

In Spain tourists find the variety of natural landscapes, the pleasant and sunny climate, the beautiful beaches and the rich and exotic cultural traditions. In addition Spain has a highly developed tourist infrastructure: comfortable hotels, restaurants where they serve traditional dishes and various amusements.

Spain ranks first in the world for the number of foreign visitors. Traditionally, most tourists go to the coast to enjoy the sun and the sea on the beach. But many tourists in the world, in addition to the pleasures of the coast, want to know better the history and culture of the country. To attract more European, American and Japanese visitors, Spanish tourism tries to improve its offer. As a complement to coastal tourism, Spain offers rural tourism, numerous excursions, different sports (water sports, hunting, horse riding, golf, even winter sports). These elements make up the new tourist offer.

Spain has a huge historical heritage. Tourists keen on cultural life can visit the monumental cities of the interior and artistic monuments of the Romanesque, Gothic and Renaissance periods. For example, the old city of Santiago de Compostela became the symbol of the struggle of Christians against Islam and serves as the universal place of pilgrimage. The Camino de Santiago has been officially recognized as the First European Cultural Itinerary. Annually almost half a million visitors travel this route. In Spain there are also 800 museums of art and culture that constitute a focus of interest that competes with the traditional summer resorts in their attraction to foreign and national tourism.

There are numerous golf courses on the coasts and in the interior of the country. This allows golf lovers to distribute their time between practicing their favorite sport and other forms of recreation.

In winter in Spain there are magnificent opportunities to practice snow sports. In the mountains of the Sierra de Guadarrama, the Sierra Nevada and the Pyrenees there are natural ski slopes and numerous winter resorts, equipped with modern mechanical facilities.

The exuberance of the Spaniards and the glorious predictability of the summer weather have been attracting refugees from northern Europe's damp and clammy lands for decades, but Spain is much more than the Costa del Sol and warm English beer. It is drenched in the historical pageantry of empire and conquistadors, the artistic legacy of Goya, Velazquez, Picasso and Dali, and the romance of Don Quijote, Papa Hemingway and the International Brigades.

In true Spanish style, cultural events are almost inevitably celebrated with a wild party and a holiday. Among the festivals to look out for are Festividad in San Sebastian in January, when the whole town dresses up and goes berserk. Carnaval takes place throughout the country in late February; the wildest is said to be in Sitges. In March, Valencia has a week-long party known as Las Fallas, which is marked by all-night dancing, drinking, first-class fireworks and colourful processions. Semana Santa (Holy Week) is the week leading up to Easter Sunday with parades of holy images through the streets; Seville is the place to be if you can get accommodation. In late April the Feria de Abril in Seville is a week-long party counterbalancing the religious fervour of Semana Santa.

The last Wednesday in August sees the Valencian town of Bunol go bonkers with La Tomatina, in which the surplus from its tomato harvest is sploshed around in a friendly riot. The Running of the Bulls (Sanfermines) in Pamplona in July is Spain's most famous festival. Along the north coast, staggered through the first half of August, is Semana Grande, another week of heavy drinking and hangovers.