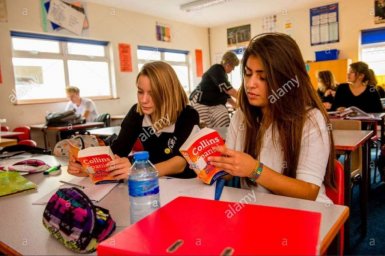 In addition to Spain, it is spoken throughout South America except Brazil. It is the first foreign language to be learned in US schools, and it is becoming more popular every year. According to statistics, in the world today there are more than 320 million Spanish speakers.

Its more correct name is «Castilian», because it was born in the Kingdom of Castile. As Castile grew in its power, the domain of Castilian grew until it became the language of the Spanish state. Like other languages of the peninsula, it comes from vulgar Latin. That is why it has preserved many words that we easily recognize today. The seven centuries of Arab rule have also left their mark. Today Spanish has more than 2,000 Arabic words (most of which begin with «al», like «pillow» or «algebra»).

It should be noted that Spanish is very homogeneous. An Andalusian understands a Galician without problems. Likewise, any nation within Latin America understands Spanish, and vice versa. Of course, each country has its way of speaking and its words derived from indigenous languages. But they are not considered dialects of Castilian, but its national variants.

Thus, for example, the bus in Mexico is called a «truck», in the Andean zone, «colectivo», and in Cuba, «guagua.» A verb as important as «catch» in Argentina is a taco and provokes giggles. The famous «che» (appeal to the friend) as well as the substitution of «you want» for «you want» are also typical Argentines. And, in all of South America, the second person of the plural disappears, yours. So «come to my house» does not mean that you are treated, but there is no other way to express it.

spanish
—
Spain
RSS
No comments yet. Be the first to add a comment!
Log in or Register to write comments
Related
The Spanish way of life
The Spanish universities
The Spanish literary tradition
The Spanish in the world
Gabriel García Márquez speaks of the Spanish language