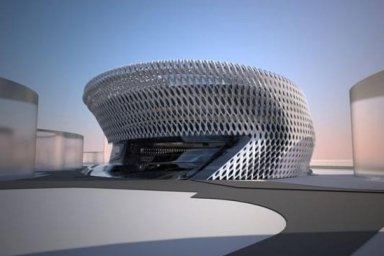 Artist's impression of Zaha Hadid's building for the Campus of Justice complex in Madrid, where work is slowing down.

Spain's long-running love affair with cutting-edge architecture has come to a dramatic end as high-profile projects from the world's greatest architects fall foul of recession and a countrywide building bust.

Last week builders walked away from one of the country's most glamorous architect-driven developments, the Richard Rogers transformation of Barcelona's Las Arenas bullring. With bills unpaid and developers unsure what to do with the 19th century bullring, Lord Rogers' project turning it into a leisure and shopping centre faces an uncertain future.

The half-built shell of Las Arenas now serves as a symbol of Spain's fall from the pedestal of international architectural glory. In Barcelona, the city that kickstarted Spain's embrace of big name architecture two decades ago, a growing number of projects are grinding to a halt. Norman Foster's colourful, ¤250m (£230m) remodelling of Europe's biggest football stadium, the Camp Nou of Barcelona football club, is among those delayed indefinitely.

Work by Frank Gehry on an audacious 34-story office block and a development of 10 tower blocks by Jean Nouvel have also been put off as the city struggles with a construction crash and tumbling real estate prices.

«There is neither the financing nor the confidence to go on,'' said the local La Vanguardia newspaper as it mourned the future loss of Barcelona's reputation as a contemporary architecture showcase.

»There are other priorities,'' said Barcelona mayor Jordi Herreu when asked why some projects were not going ahead.

The slowdown is not confined to Barcelona. London-based architect Alejandro Zaera Polo recently walked away from a building at Madrid's new Campus of Justice – which is also set to boast buildings by Rogers, Foster and Zaha Hadid – complaining the budget was too low.

In Valencia, a new stadium for the city's football club also stands half-built as the owners admit they have no way of paying for it to be finished.

The collapse of such high-profile projects follows two decades of frenetic building that turned Spain into a playground for the world's star architects.

Financing for many schemes, however, depended on land sales or the construction of office blocks and residential buildings that would help fund them.

A Spanish housing bubble burst last year, bringing construction to a grinding halt. Up to 2m recently finished homes have yet to be sold and the value of building land has been wiped out in some places.

Some estimates suggest the excess stock of newly-built homes will not be sold off until 2012. House prices are predicted to fall by up to 30%.

With Spanish developers queueing up to file for bankruptcy, few can now afford big-name architects. Metrovacesa, which owns the Las Arenas site, was recently taken over by a group of banks after it failed to pay debts and is sacking its staff.

Barcelona led a fashion among Spanish cities for turning to the great names of contemporary architecture to transform urban centres with huge ‑ and often costly ‑ emblematic buildings.

Its buildings for the 1992 Olympic Games set the trend, bringing in architects like Foster, Gehry and Arata Isozaki.

Gehry's transformation of the northern city of Bilbao through a single building, the titanium-clad Guggenheim museum, marked the spread of the Barcelona model to the rest of Spain.

Cities of all sizes vied to bring in the big name. Many winners of the prestigious Pritzker prize ‑ dubbed the architects' Nobel ‑ found themselves busy on Spanish projects.

Madrid's Campus of Justice, with its collection of designs by Pritzker-winning architects, is another project that is slowing down.

«The campus is no longer a top priority and resources must go elsewhere,» admitted Alfons Cuenca, deputy head of the Madrid regional government's justice department. «That does not mean it isn't going ahead, but that the work will slow down.''

Architects admit the writing is on the wall but hope Spain will recover a taste for signature buildings when the recession ends.

»You cannot pick up a newspaper without reading about the financial crisis,'' said a source close to Gehry's practice, commenting on his Barcelona office block. «We've waited many years to do this project, and we will keep waiting.»

«We are unable to comment on how the Las Arenas project will proceed following the recent change of ownership,'' said Lennart Grut, a senior director at Rogers' architectural partnership. „However, we continue to maintain our site presence.''

Meanwhile the fenced-off shell of Las Arenas will provide a depressing reminder to visitors that the boom days of Spanish architecture are over.

building, Zaha Hadid, Madrid, Campus of Justice, complex
—
Spain
RSS
No comments yet. Be the first to add a comment!
Log in or Register to write comments
Related news