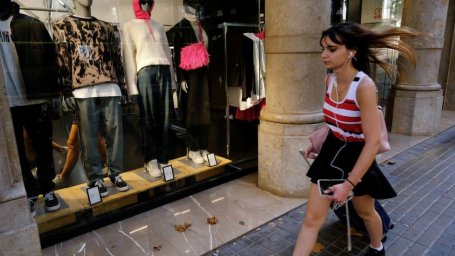 Spain experienced unusually warm temperatures on Thursday, bringing some bathers out to beaches but also adding to mounting concerns about changing weather patterns in Europe.

Spain on Thursday experienced unusually warm weather with some places set to surpass the 30 Celsius (86F) mark, and the national weather agency AEMET predicted that it could be the hottest October since records began.

AEMET said every day of the month, except Oct 1st, had been warmer than usual at this time of year.

In the traditionally cooler and rainier Basque Country in the north, temperatures also hovered around 30 Celsius, with the coastal city of San Sebastian experiencing heat more fitting of summer.

“We’re grateful for the weather. It’s good for the terraces, we appreciate it,” waiter Carlos Cruz.

In the next few days Nice can expect a daily high of around 24C, with a similar forecast for Malaga in the south of Spain.

Millions anxious about the jump in Europe's fuel prices will not have to turn on their heating just yet.

However, it may also be a sign of changing weather patterns after a summer which saw extreme heat in Europe, with ferocious wildfires and droughts.

Heatwaves have become more frequent and more intense, and last longer, because of human-induced climate change.

The world has already warmed by about 1.1C since the industrial era began and temperatures will keep rising unless governments around the world make steep cuts to emissions.