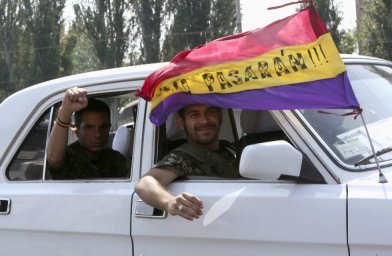 Two young Spaniards have travelled to the east of Ukraine to join the pro-Russian militia known as the Vostok Batallion. Rafael Muñoz Pérez, 27, and Ángel, 22, reportedly form part of one of the most violent and feared groups, which the Kiev government blames for some of the worst atrocities of the conflict so far.

Pérez is a former social worker from Madrid, now based in Gijón (Asturias), where he has been a member of the youth wing of the United Left group since 2010. Ángel, meanwhile, is from Murcia, and belongs to the youth wing of a branch of the Spanish Communist Party.

The pair traveled to Ukraine from Madrid in July, with barely “€500 in their pockets and no return ticket,” according to newspaper La Nueva España, which first broke the story.

After a five-day stay in Kiev, from where they could observe the violence on the streets, they traveled to Crimea, where they joined the rebel forces in the east of the country.

They have since posted a number of videos on websites such as Facebook and YouTube, in which they appear carrying rifles and other weapons in Donetsk, one of the bastions of the resistance. There is, however, no evidence as of yet that they have taken part in any operations.

In Gijón, local residents were surprised to hear the news of their former neighbor Rafa

Judging by the photos and comments uploaded to the internet, the pair want to show their pride at joining a fight that they view as similar to the Spanish Civil War. “I’ve spent months following the conflict in Ukraine, both on TV and on the internet,” Rafa told France 24 via an interview on Facebook. “This has allowed me to see the reality of what is happening here, as well as the manipulation and misinformation from the majority of the media in the West. Given that I don’t currently have a lot of responsibilities I decided to sell my car so that I could travel out here and help the people in the southeast of the country as much as I can.”

In Gijón, local residents were surprised to hear the news of their former neighbor Rafa. “He told me about it at the last minute,” explained his friend Manuel. “He didn’t want people to find out. He went to help the people in Ukraine and the truth is that it caught me on the back foot. He connects with me from time to time on Facebook and the truth is that the situation is very different from what they found when they arrived,” he continues, adding that he is concerned about the situation, given that the family of the young man has health problems.

We need you to spread the truth, so that the world stops looking the other way”

EL PAÍS was unable to contact either of the young men via phone or the social networks.

“We need you to spread the truth, so that the world stops looking the other way, as was the case in our country in 1936,” Muñoz stated in an interview, in which he described himself as a Republican. “I am sure I will be back soon to carry on the fight for Justice and Liberty. Many others did the same for the freedom of my country in ’36, because the whole world was looking the other way back then, and that is something I have always criticized, given that it meant 40 years of Francoist dictatorship with HUGE oppression.”

spaniards, ukraine, vostok, terrorist
—
114
Spain
Tweet
RSS
No comments yet. Be the first to add a comment!
Log in or Register to write comments
Related news

Eight Spaniards arrested after returning from combat in Ukraine