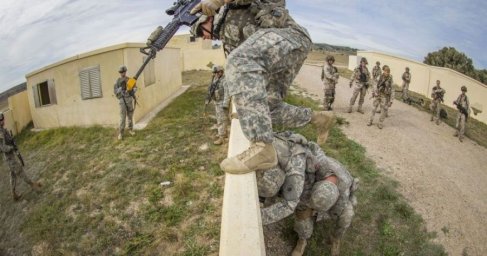 Trident Juncture will take place in Spain, Portugal and Italy from October 21 to November 6, with over 35,000 participants.

The exercise will take place from October 3 to November 6, and is NATO’s largest exercise since 2002.

Over 500 Estonian troops are participating in Trident Juncture 2015, NATO’s “exercise of a decade”, from October 21-November 6.

The exercise involves 36,000 personnel from more than 30 NATO allied and partner nations, as well as 60 ships and 140 aircraft. Air, land, maritime, and special forces will participate simultaneously in 16 locations throughout Italy, Portugal, Spain, the Atlantic Ocean, the Mediterranean Sea and also Canada, Norway, Germany, Belgium and the Netherlands. It’s the largest joint exercise since Strong Resolve in 2002.

According to the official statement, “Trident Juncture 2015 will demonstrate NATO’s new increased level of ambition in joint modern warfare and will show-case a capable, forward-leading Alliance equipped with the appropriate capability and capacity to meet present and future security challenges.” The exercise also allows NATO to test the state of its Very High Readiness Joint Task Force, the creation of which was agreed at Wales summit in 2014.

Estonian troops take part in the largest NATO exercises in the last decade. As part of the maneuvers, 500 fighters of the Estonian Scout Battalion will demonstrate their willingness to repel the attacks of a hypothetical aggressor on rough terrain in Spain.

The Trident Juncture military maneuvers, which take place on the Iberian Peninsula, are NATO’s largest exercises over the past 13 years. The last time such a large-scale gathering was held in 2002 as part of the Strong Resolve exercises.

500 soldiers, mainly the Scout battalion, and almost 150 pieces of equipment were sent from Estonia to Spain. For a week now, Estonian fighters as part of the Baltic battalion have been taking part in the second – active – phase of the exercises.

“This is a regular gathering of NATO’s rapid reaction forces. Together we work out collective interactions to achieve one goal. True, this time the maneuvers have changed somewhat. This is what the world’s security situation requires,” said Lieutenant Colonel Aron Kalmus, head of the operations department of the General Staff of the Defense Forces.

“Within the framework of the current exercises, Estonia and the soldiers of the Scout battalion, which today form the basis of the single Baltic battalion, were integrated into one unit with our neighbors – Latvia and Lithuania,” he continued.

The scenario envisages the involvement of all components of modern warfare, including missile defense, counteraction to cyber attacks, actions in the conditions of a hybrid war, and the so-called propaganda operations.

The purpose of the exercises is to work out the interaction between all the forces of the North Atlantic Alliance if the aggressor country attacks the ally and it will be necessary to use the 5. article on collective defense.

“The final stage of the exercises is just beginning. Starting October 30, the battalions will begin to receive orders. But now elements of a hybrid war are being played at the training camps. Whether it’s a tip-off, the actions of units in settlements, etc. – all the details are played out by soldiers to avoid further casualties associated with hostilities, “Kalmus explained the course of the exercises.