Spanish tanks for Latvia, or How NATO strengthens the eastern flank 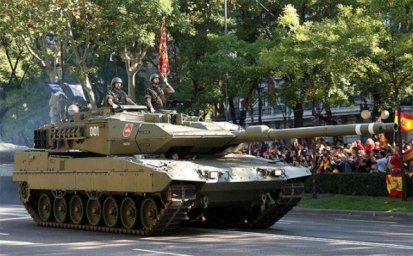 For the first time in history Spain will deploy its tanks abroad – in Latvia as part of a mission to strengthen NATO in Eastern Europe. And what about the dispatch of the Spanish contingent in Spain itself?

The Ministry of Defense of Spain has published data on the grouping of its forces, which in May 2017 will go to Latvia. This is done in accordance with NATO’s decision to deploy ground units from 16 alliance states in Poland and the Baltic countries: a total of four battalions of up to 4000 people. Madrid will also continue to participate in the NATO mission to protect the Baltic airspace, begun back in 2004, and will send its fighters to Estonia in April.

The government of Spain notes that the direction of the military on the eastern flank of NATO meets the objectives of a common European defense policy. This policy is supported by almost all political parties in Spain and the country’s public, with the exception of a number of radical left and right wing groups.

For the first time, the Spanish military will use tanks in their foreign mission. We are talking about six Leopard 2E machines built in Spain using German technology, DW spokesman Manuel Gomez Prieto explained to DW. The tanks are equipped with a 120 mm L55 cannon and two MG3 machine guns of 7.62 mm caliber. The thickness of the armor is 1350 mm. According to the representative, the tanks will escort 15 infantry fighting vehicles of the Pizarro type, a joint Spanish-Austrian production, having a 30-millimeter cannon and machine gun. This equipment and 350 troops sent to Latvia represent the Extremadura XI mechanized infantry brigade with a permanent deployment in the Spanish province of Badajoz. The trip will last until mid-November 2017.

As for the planes that will fly to Estonia as part of the NATO mission to patrol the airspace of the Baltic countries – Baltic Air Policing – we are talking about four US-made F / A-18 Hornet multi-role fighters. They, according to the representative of the Spanish General Staff, belong to the 15th wing of the Spanish Air Force with a base in Zaragoza. Spanish pilots will leave for the Baltic region for the fourth time in 13 years. Meanwhile, the frigate Almirante Juan de Borbon (F-102) of the Spanish Navy with a crew of 200 people already serves in the group of ships of the alliance called Standing NATO Maritime Group Two. The area of operations of the group is the Eastern Mediterranean and the Black Sea.

Together with NATO partners

Announcing the dispatch of the Spanish contingent in mid-February, Spanish Defense Minister Maria Dolores de Cospedal said that her country, as a member of NATO, “is obligated to protect both its own interests and those of its allies, including the Baltic countries.” She explained that we are talking about “containing Russia” in this region – on the basis of the decision of the NATO summit in Warsaw in July 2016. However, the minister recalled that “Spain has traditionally strived to improve relations with Moscow.” Professor of Political Science at the University of Madrid, Angel Muñoz Rodero, commenting on the Minister’s remarks at the request of DW, noted that the official Madrid, as a rule, refrains from publicly criticizing Moscow. The reason is unwillingness to spoil relations, to lose trade and profitable tourist relations. At the same time, the attitude in Spain to current Russian politics, which determined its military presence in the Baltic countries, according to the professor, is rather negative and based on the developments of the Elcano Institute for Strategic Studies in Madrid.

This leading analytical center in Spain is very critical of Kremlin policies. In a recent report on this subject, Elcano experts described the policies of the Russian leadership as “irrational, revisionist, and unpredictable.” “Russia does not comply with international agreements, relies on its military superiority, taking advantage of the fact that since the beginning of the 90s the United States has reduced its military presence in Europe, and other NATO countries have cut their military spending by 20 percent,” the authors of the report write. In addition, Moscow is trying to control neighboring countries, created “frozen conflicts” in Moldova and Georgia, annexed Crimea, and supports the separatists in the Donbass. “

Politicians and the public do not mind

In a similar context, the question of sending the military to the Baltic countries and most of the Spaniards is being considered, said Angel Muñoz Rodero, professor of political science at the University of Madrid. This, in his opinion, explains the lack of opposition in the society of the NATO mission. The main opposition force in parliament, represented by the Spanish Socialist Workers’ Party, which usually disputes any step by the conservative government of the People’s Party, is silent this time. Other parties of the left and right parties represented in the legislative body did not raise any objections. Even the left-wing non-governmental organization Forum Against Imperialist War and NATO, which, although it has only a few dozen members, has been very active on social networks, has not criticized.

“However, this does not mean that everyone in the country agrees with the dispatch of the military,” Professor Munoz Rodero concluded. Indeed, a participant in the said Forum named Miguel told DW that many of his associates “disagree with any foreign missions of the Spanish troops and that the funds allocated for this should go to the social needs of the Spaniards and to help refugees from developing countries.”

defense, Latvia, NATO, spanish, tanks
—
37
Spain
Tweet
RSS
No comments yet. Be the first to add a comment!
Log in or Register to write comments
Related news

What’s going on in the Spanish property market?
Ads