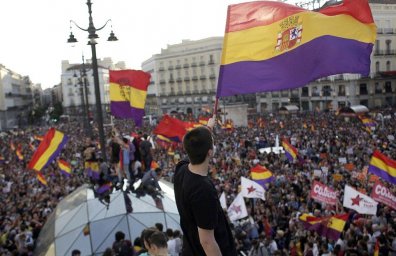 Today is the 75th anniversary of the Second Republic in Spain, considered as the country’s first taste of democracy.

It began on April 14th 1931 after King Alfonso XIII had gone into exile and local elections resulted in Republican candidates winning the majority of votes in the urban areas.

A provisional government was set up under Niceto Alcalá-Zamora who immediately occupied the ministries, swept aside titles of nobility and confiscated the assets of the King.

Alcalá-Zamora was born in Priego de Córdoba, and had previously been an eloquent orator in congress. He was also Spain’s representative in the League of Nations.

The arrival of the Second Republic resulted in the words of one observer in ‘a revolution without precedent in Spanish rural life’. There was a new wage arbitration system which prevented landowners from hiring non-union labour during disputes, the eight hour working day was created, women obtained the vote, and the idea of collective bargaining came into being.

The church came under fierce attack, and soon in October 1931 Alcalá-Zamora resigned in protest, succeeded by Manuel Azaña. The Jesuits were expelled from Spain and a new law ordered that all heads of religious orders here had to be Spanish, and could only be appointed on the say so of the government.

The lack of Jesuits crippled the education system and the highest tariffs in Europe hit trade, especially with the United States.

1932 saw a charter for Catalan home rule, and after that both the Anarchists and Conservatives stepped up their opposition. The right wing swept to power in the 1933 general election, lead by radical Alejando Lerroux, but needed help from smaller parties to govern in a coalition which ran from Christian Democrats to Fascists.
«The arrival of the Second Republic resulted in the words of one observer in ‘a revolution without precedent in Spanish rural life’»
The wideness of the coalition led to an uprising from Anarchists in Asturias who occupied a Oviedo leading to the deaths of about 40 people. The city would later be bombarded almost to oblivion and other uprisings in the north and Cataluña would be repressed by a little man called General Francisco Franco.

The nationalists claimed that the left wing republicans were only democrats when they won elections. The army officers and Franco led the coup on July 18th 1936 which was the start of the Spanish Civil War.

Last week, Spain’s current Prime Minister, José Luis Rodríguez Zapatero, upset some of today’s monarchists by declaring ‘The Spain of today looks back at the Second Republic with recognition and satisfaction’. The Prime Minister said that some of the ideas and aspirations of the time are just as valid today.

Possibly the Second Republic has never received the praise it may have deserved, simply because it ended so tragically.

Despite dying in exile in Argentina, Alcalá-Zamora’s body was brought back to Spain in 1979 and he was finally laid to rest in the Almudena Cemetery.

The 40 years of Franco presented a distorted image of the previous regime and when the transition to democracy got underway with Franco’s death and the able strong hand of King Don Juan Carlos, part of that healing process demanded a type of collective amnesia – a pact of democratic solidarity in the fight to move forward.

Now that democracy has matured, and there are increasing calls for some of that memory to be recovered. These are just demands that help with the healing process, and also pay tribute to those who fought over the years for the freedoms which we now take all too much for granted.
Let’s hope that today’s events to commemorate the 75th anniversary of the Second Spanish Republic help Spanish society to understand the dramatic changes it has undergone, and to learn from the past to ensure that the errors made will never be repeated.