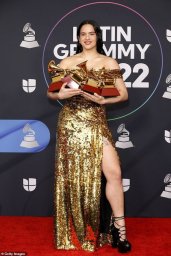 The Latin Grammy 2022 ceremony was held in Las Vegas and the Spanish singer Rosalía was one of the big winners of the night. Among the awards, he won Album of the Year, with 'Motomami'.

The ceremony took place on November 17 in Las Vegas and saw the Spanish pop star take home four awards for her recent album ‘Motomami’, including Album of the Year, Best Alternative Music Album, Best Engineered Album and Best Recording Package. ‘Motomami‘ was originally released in March before a deluxe edition, ‘Motomami+‘ arrived in September, with ‘Despechá’ released as its first single in July.

Speaking about ‘Despechá’ when it was first released, Rosalia said: “There are many ways to be Despechá, in this theme it is from the freeness or the craziness, moving without reservations or regrets.

“This is the place from where I make music, from where I did it when I first started and where I will continue to until God says so.”

Rosalía took to the stage in this spectacular golden dress.

Rosalía on the red carpet

She walked the red carpet of the Latin Grammys in this dress full of crystals and sunglasses.

You can watch Rosalia’s performance below:

Rosalía, the revolution of Spanish music

The singer who has revolutionized the world with El mal querer and her latest album, Motomami, has been one of the protagonists of the 2022 Latin Grammys, held on the night of this past Thursday.With a total of nine categories, Rosalía has become the woman with the most nominations in the history of this contest.

Rosalía arrived and won.The Catalan managed to win no less than four awards: Album of the Year, Best Alternative Music Album, Best Recording and Best Production for her Motomami, which has already been proclaimed this year's essential album.

Her three albums have been presenting different facets of the artist

Her first album, Los ángeles (2017), was the one that gave the Catalan a reputation within the independent scene in Barcelona.Thanks to the collaboration of the Spanish producer and musician Raül Refree, Rosalía demonstrated her talent for flamenco music and focused on a theme that was especially in keeping with the genre: death.

However, the rise to fame was not until her single Badly, which the artist included in her second studio album El mal querer, considered one of the best concept albums in history.This work was the result of her final degree work at ESMUC, which gave her an honors degree and the definitive boost to world fame.

Once within official circles, Rosalía took the opportunity to finish making herself visible thanks to collaborations with highly influential artists such as C. Tangana, Bad Bunny, The Weekend, J Balvin, Tokishca or Billie Eilish.Some of the most outstanding songs among her collaborations are With height or Linda.

Even though she is a reference in Latino circles and drinks a lot from flamenco culture, Rosalía does not forget her origins.In this way, in the summer of 2019 she released two singles: God free us from money and Milionària, the first of her career in Catalan.This song was exceptionally included in the repertoire of the Motomami World Tour concerts in Barcelona, which were held on July 23 and 24.

The definitive consolidation of the singer has not been until the publication of her new album Motomami, a series of 16 songs that, according to the Catalan, are the ones that most define her as an artist.The album was produced over a slow fire, over a period of three years, which includes the period of the pandemic.

Motomami's success is indisputable and has led the Catalan to tour the world with her Motomami World Tour, still in progress.With only three albums, the artist has proven to be a versatile musician without fear of risk or experimentation.With one of the best voices in the industry, personal and personalized lyrics, and a distinctive yet versatile style;Rosalía is a phenomenon of Spanish music that will still offer us many surprises.

Spanish singer Rosalia poses during an interview with Spanish international news agency ‘Efe’ in Madrid, Spain in 2018. She was promoting her second album, ‘El mal querer’, which launched that November.

Rosalia is best known as a Spanish singer/songwriter. She started her singing career when she auditioned for a singing competiton show when she was just 15. Although she didn’t win, she was able to get her face and name out there and continued to work on her music until she released her first album, ‘Los Angeles,’ in 2017.

The talented songstress went on to work with some of music’s biggest stars, including Bad Bunny and Travis Scott, and has made her own mark in the industry. With eight Latin Grammy Awards, and one Grammy Award, she has been recgnized for her talent and success.

Rosalía, ​Rosalía Vila Tobella, Latin Grammy, Motomami, spanish, music
—
92
Spain
Tweet
RSS
No comments yet. Be the first to add a comment!
Log in or Register to write comments
Ads