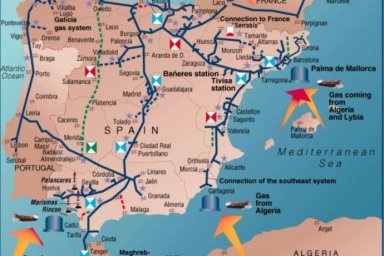 The MidCat: In 2010, a project aimed at transporting 7.500 million cubic metres of gas by linking Catalonia (Spain) to Occitania (France) and from there to other European Union countries.

With an initial estimated cost at over three billion Euro, this MidCat project quasi-blocked just one year later, to be finally stopped in 2018 following cost and impact studies.

Following the energy impact of the condemnable proxy war in Ukraine, Spain has recently proposed relaunching the MIDCAT. But France continued to block the project alleging high costs. Maybe also under the heavy pressure of its extended, powerful business of nuclear plants?

The Italian Connexion: Meanwhile, taking advantage of the deteriorated relations between Spain and Algeria due to Madrid's support to the annexation of Western Sahara by Morocco, Rome rushed to negotiate with Algiers the transportation of the Algerian gas and oil to Europe through Italy.

But this project hasn't worked out either.

Sánchez, Macron and Costa agree on a green energy corridor between Barcelona and Marseille instead of MidCat

Spain and Portugal bury the gas pipeline in the Pyrenees but in exchange they achieve an interconnection through the seabed.The president believes that this is «very good news for Spain, Portugal, France and Europe».Germany also celebrates an agreement that ends with «deadlock» negotiations.

Spain, France and Portugal have decided to bury the MidCat gas pipeline project in the Pyrenees, to which Paris was strongly opposed for strategic reasons but also due to environmental resistance, and in exchange they have agreed to promote a «more ecological» alternative that will go by sea between Barcelona and Marseille and which has already been nicknamed BarMar. The new project, a «green energy corridor» of more than 360 kilometers under the sea, designed above all to carry green hydrogen, the energy of the future according to experts, and only very residual gas, has been agreed at the meeting held in Brussels this Thursday between the President of the Spanish Government, Pedro Sánchez, the French, Emmanuel Macron, and the Portuguese Prime Minister, António Costa.