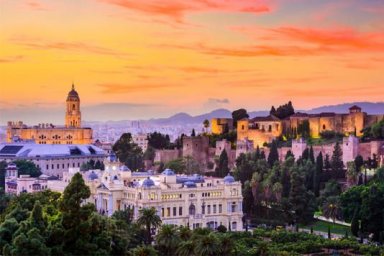 Málaga is a port city known for being the hometown of the famous artist Pablo Picasso. Aside from this, the city is a beautiful place to visit as it features beaches with golden white sand and the vast Old Town with stunning architecture. Guests will love exploring the city as they can stroll around and take in its scenery.

In Málaga you will find some beautiful attractions that you just cannot miss! Places like The Roman Theater, Gibralfaro Castle, and Museo Automovilistico Y De La Moda. This well-preserved theater was built to showcase the technology and project the political power of the then mighty Roman Empire. The semicircular stands are among Europe's most well-preserved Roman ruins. Also, during certain times of the year, the stage is sturdy enough to host actual performances. Now, as back then, this theater still continues to entertain or provoke deep thought or emotion. This continuity with antiquity is also emphasized in the nearby Visitors' Center. Here, new technologies and archaeological finds give us a glimpse into the life and customs under the sway of the Roman Empire. The Castle of Gibralfaro is situated on the homonymous mountain of Gibralfaro in Malaga in southeast Spain. It was considered the most impregnable fortress on the Iberian peninsula for a time. It has two lines of walls and eight towers. The outer wall meets the coracha, zigzagging walls arranged to link to the Alcazaba Castle. Inside you can walk around the whole perimeter of the fortress. The Castle is divided into two parts. The upper part is called the main courtyard and houses the Interpretation Centre where you can discover the history of the castle through the lives of its inhabitants. You will find the Main Tower (Torre Mayor), 17 meters high, the Phoenician well and the baths in this section. The Airon well was dug in solid rock to a depth of 40 meters. A museum that celebrates the evolution of car and apparel design.© Provided by Microsoft

If you're a car lover or a fashion fanatic, or both, indulge your hot pursuits in this unique museum. Around 1.5 acres of exhibit space is allocated for cars, clothing and jewelry. Among the automakers featured here include Bugatti, Ferrari and Mercedes Benz. You'll see cars made in time periods starting from the 19th century up to today. There are even exhibits of automobiles powered by electricity, hydrogen and steam. Some of the vehicles are also placed side-by-side with clothing, implying that automobile design evolves with changes in fashion trends. One of the most stunning cathedrals in Southern Spain

The cathedral is surrounded by the remnants of a now-missing section of the mediaeval Moorish walls that formerly surrounded the Alcazaba and the Castle of Gibralfaro. Close to the site of an early Almohad mosque, it was built between 1528 and 1782.

The Montes de Malaga is located north of Malaga. This is a natural park with beautiful hills, mountains

From the 15th century through the turn of the twentieth century, this region was exploited. The oldest trees were cut down to make room for vineyards and olive trees. The city of Malaga was also affected as a result of the exploitation and removal of the old trees. Floods wreaked havoc on the villages surrounding Malaga, as well as the city itself. Picasso Museum is a must visit for any art enthusiast

Museo Picasso is considered as Málaga's foremost attraction. Dedicated to the works of the iconic artist Pablo Picasso, who was born in Málaga, it showcases some of his best pieces that span across almost 80 years of his work. The perfect place to delve into Picasso's creative ability, the Museo Picasso also does a wonderful job of preserving his legacy. The Neoclassical structure was designed to resemble Renaissance Italian palaces. For the bottom two levels, four hallways or bays circle a central patio that is porticoed; then, on the third storey, there is an open gallery with an openwork balustrade that serves as a parapet; between parts of the parapet are Roman busts atop low walls. The main façade is flanked by tall palm palms with bossed external walls. The Museo de Málaga restored the structure for permanent museum use.

One of the most stunning cathedrals in Southern Spain

The cathedral's ornate Baroque architectural elements combine with some hints of Renaissance design to form a visually stunning art object. In more ways than one, you will get a glimpse of heaven here either through prayer or through browsing the stone medallion carvings located above the building's finely-crafted doors. Some of the doors represent Malaga's patron saints, Saint Cyriacus and Saint Paula. Be transported to the past as you visit the Alcazaba of Málaga. It is located in Spain and is well known to be the one of the best preserved Alcazaba in the country. Here, tourists would be able to see remnants of Roman theatre of the 1st century. It is also known to be the place where one of the longest sieges in the history of Spain happened. Get a taste of Picasso's art and creativity

The Picasso Museum is located in Malaga, Spain. It is also the birthplace of artist Pablo Ruiz Picasso. It debuted in the Buenavista Palace in 2003 and has 285 pieces donated by Picasso's family. The museum was founded owing to the artist's daughter-in-law and grandson, Christine and Bernard Ruiz-Picasso, whose gifts form the foundation of the collection. One of Andalucia’s top attractions, El Caminito del Rey is a narrow hiking path known for its nearly 2-mile (3-km) stretch of man-made boardwalks and glass footbridges that hug the sides of sheer cliffs and hang over river gorges. The roughly 3-hour hike takes you on paths 350 feet above the Guadalhorce River, offering stunning views of the Gaitanis Canyon. The Paseo del Parque goes along the harbour east of Malaga's Plaza de la Marina. Palm palms and plane trees provide shade, and fountains and art adorn the grounds. Opposite the Town Hall and the Paseo del Parque lies the Fuente de Neptuno (1560). The Parque de Malaga, unlike other botanical gardens, was created with the public in mind. The Museo Picasso Málaga is located in Málaga, Andalusia, Spain, and is named to the artist Pablo Ruiz Picasso

The Museum of Malaga is currently the largest state museum in Andalusia. It is housed in the Palacio de la Aduana, which is located near Malaga's port. The Museum of Malaga has two collections, each with around 15,000 objects dating from the eighth century BC to medieval times. The Carmen Thyssen Museum is an art gallery in Málaga, Spain. The museum's main focus is 19th-century Spanish painting, mostly Andalusian, and is based on the collection of Carmen Cervera, Baron Hans Heinrich Thyssen-fifth Bornemisza's wife. The art collection of the Thyssen family has been on exhibit in the Thyssen-Bornemisza Museum in Madrid since 1992. Carmen Thyssen, on the other hand, has been an art collector since the 1980s, and her personal collection is displayed separately. In 1999, she decided to let the Thyssen-Bornemisza Museum show several of her works for a period of twelve years. Meanwhile, in Málaga, a home for her collection was sought.