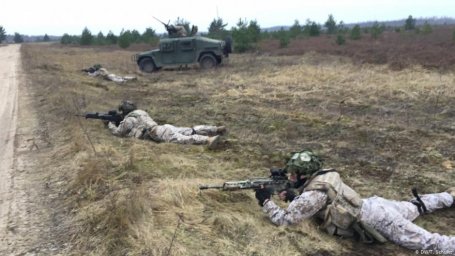 300 Spanish soldiers will join the Canadian NATO battalion in the Latvian Adazi in the spring, the Latvian Defense Minister said. The troops of Italy, Poland, Slovenia and Albania will be stationed there.

Spain will provide 300 soldiers for the NATO battalion in Latvia, commanded by Canada. This was announced by Minister of Defense Raimonds Bergmanis on the air of the Latvian radio on Wednesday, January 11. In general, the battle group on the territory of Latvia will be 1,100-1,200 soldiers, he said.

In addition to Spain, Albania, Italy, Poland and Slovenia will also send their soldiers to Latvia. The arrival of the first military personnel at a military base in Adazi is expected in the spring of 2017.

As Bergmanis previously stated, Riga intends to invest about 7 million euros in the development of the infrastructure of the village of Adazi, where the training ground of the National Armed Forces of Latvia is located. An organizational meeting will be held in Ottawa in late January to discuss the practical details of the mission.

On January 7, the first 250 troops from the 3rd Armored Brigade Combat Group of the 4th US Infantry Division arrived in Poland. The main part of the armored brigade will be deployed on Polish territory, which will strengthen NATO’s eastern flank as part of Operation Atlantic Resolve (“Atlantic Resolve”).

At the summit in July 2016, countries belonging to the North Atlantic Alliance decided to deploy about a thousand soldiers in Poland, Latvia, Lithuania and Estonia in order to strengthen the eastern borders of NATO. In Lithuania, the battalion will be commanded by Germany.

defense, Latvia, NATO, soldiers, spanish
—
40
Spain
Tweet
RSS
No comments yet. Be the first to add a comment!
Log in or Register to write comments
Related news

Spanish tanks for Latvia, or How NATO strengthens the eastern flank
Ads