Hevia: I have good ideas for Eurovision 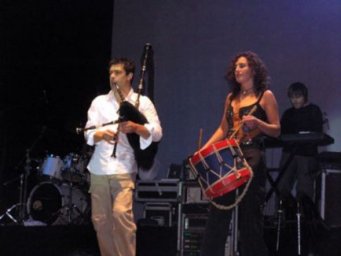 Our partner site eurovision-spain.com, on the day of their 7th birthday, has published an interview with Hevia, a well-known Spanish bagpiper that bases his compositions in a mixture of celtic and electronic sounds. Hevia says that he has«good ideas» for the contest and that he could apply for a possible preselection in Spain.

José Ángel Hevia hails from the Northern Spanish region of Asturias, an area where the celtic tradition is still alive and enjoys a good health. Bagpipe is a very typical musical instrument there and Hevia knows it very well, as he is one of the most respected bagpipers in Spain. Years ago, he reached the first positions in the Spanish hitlists thanks to a mixture of celtic and electronic sounds.

Hevia stated to our partners of eurovision-spain.com that «Spain has been represented by songs with Southern roots. It would be fantastic to show a new face with a very different kind of music: the music from the North». Asked about if he would like to represent Spain in Eurovision, Hevia said: «I would love to do it. I think I have very good ideas regarding that».

Entering a possible preselection held by TVE is «a possibility» for Hevia. The bagpiper is very familiar to Eurovision, since «it is an icon» for his generation. Hevia revealed that since he was a child, he and his family «followed the performances and the exciting voting round. There are a lot of memories surrounding this event», Hevia added.

Hevia is currently on tour, presenting his latest CD Obsessión, although he assures that «the tour started ten years ago [the date of his debut] and now continues». Hevia will be visiting several countries: Spain, Italy, Portugal, France, the Netherlands, Israel, Asia and South America.

Hevia, Eurovision
—
Spain
RSS
No comments yet. Be the first to add a comment!
Log in or Register to write comments
Related news