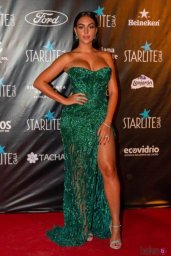 The 28-year-old Spanish model lived in a cramped, shared house and worked as a £250-a-week ($275) shop girl before a chance encounter with football legend Ronaldo transformed her life.

Georgina Rodriguez is the captivating and glamorous girlfriend of footballer Cristiano Ronaldo. The duo’s love story has had us all infatuated for quite some time now after following their high life posts on social media but underneath all the glitz and the glamour, who really is Georgina Rodriguez? – Here’s everything you need to know.

Georgina is a 28-year-old Spanish model, dancer and mother to Cristiano’s four children Alana Martina, Cristiano Jr, Eva and Mateo. She has 30 million followers thanks to dating the most followed man on Instagram. She is also at present pregnant with twins and vacationing with her family in Dubai but has come a long way since her humble beginnings in Jaca, Spain where she grew up with sister Ivana, Spanish Mother and Argentinian Father.

She had much of a happy childhood in her small home town with her family. She attended a Catholic school and was a devoted ballerina for most of her young life until she decided to make a big move to the city, where she became a luxury sales assistant in Madrid. First working in Massimo Dutti and shortly after transferring to Gucci, this is when her life drastically changed from selling luxury items to then wearing Jean Gaultier couture on the red carpet at the Cannes Films Festival.

It was while working at Gucci the romance began between her and Cristiano when he was a personal shopping client of hers and asked her if she’d care to join him at an event. The rest is history after being shot together by the paparazzi several times the pair’s relationship soon began to grow steadily. In her new Netflix series, ‘I am Georgina’ she explains how she would travel to work on a bus and then be picked up by Cristiano in a Bugatti. – Cristiano also explains in the series that he never expected that things would become so serious between the two until eventually she became the woman of his world and have been together now for over 5 years.

Even though Georgina doesn’t dance so often nowadays she still loves to dance and did not put her dance training years to waste after she blew everyone away performing a sultry salsa dance which stole the limelight during an Italian dance festival. Cristiano was standing in the crowd in total awe of his beautiful woman.

The power couple and their adorable family have been on holiday sharing the most beautiful pictures in Dubai for the past week, celebrating the new release of the Netflix documentary ‘I am Georgina’. The series documents Georgina’s day to day life while she reflects back on her past. The beauty certainly has had an extraordinary lifestyle change which is nothing short of lavish.

They celebrated the premiere of the new docu-series as well as her 28th birthday with Cristiano bestowing her with the most opulent gift this week by lighting up the world’s tallest building to project the birthday message; ‘Happy Birthday Gio’. This professes how proud he is of her recent success on her new reality show. The three-minute laser show for his adorned love Georgina cost Dhs 249,770; just a trivial amount for the billionaire sportsman.

Although Georgina now lives a life that some of us could only dream about, this does not seem to have changed her truly genuine character. Her kindness is still evident and remains by bringing joy through her charity work to many other less fortunate people around the world. Georgina is still a true heart of gold.

I am Georgina Official Trailer Netflix

Georgina Rodríguez's life changed five years ago thanks to love. Now is time to know the personal side of the woman behind the covers, the Instagram stories and the red carpets. I am Georgina, coming this January 27, only on Netflix.

Join Georgina Rodríguez — mom, influencer, businesswoman and Cristiano Ronaldo's partner — in this emotional and in-depth portrait of her daily life.

Georgina Rodriguez, Cristiano Ronaldo, Netflix
—
82
Spain
Tweet
RSS
No comments yet. Be the first to add a comment!
Log in or Register to write comments
Ads