Esther Cañadas: you can't make plans with such a life 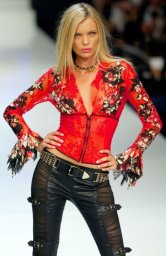 Esther Cañadas was born on March 1, 1977 in southern Spain, in the beach town of Alicante Costa Blanca. Even as a child, her mother insisted on her daughter's participation in children's fashion shows, although Esther dreamed of devoting her life to forensics.At the age of 14, the girl won a beauty contest, and her face has been on the covers of magazines.

Esther signed her first contract with Take 2 Agency after winning a local competition among young girls in a teen magazine. She represented her country in the selection of models and was sent to South Africa. Upon returning to Barcelona, she starts working as a model. Already at the age of 15, Esther decided to start her own life, as the tensions with her father forced her to do it. She took up this job without much enthusiasm, but then, she realized that the modeling business is what she really wanted to do.

In 1996, Esther moved to New York and tried out there as a model. In a record time of two days, she signed contracts with twenty designers for fashion shows. In 1997, she worked simultaneously at the shows of Mossimo, Atelier Versace, Victorias Secret, Fifth Avenue, J Crew, Saks. But, perhaps, the most successful and memorable one was the DKNY advertising campaign. During this period, she frequently starred for the Spanish editions Elle, Vogue, the Italian version of Marie Claire, as well as the Mademoiselle and Mondo Uomo editions.

The famous eyes and gait of a creeping cat have attracted the attention of the most famous and popular fashion houses and brands. DKNY, Todd Oldham, Versace, Calvin Klein, D&G, Oscar de la Renta, Richard Tyler, Giorgio Armani, Valentino, Givenchy are just a few of the fashion brands that Esther has worked with. Some find Esther similar to Kate Moss. And not only because of the «lost gaze of a homeless teenager», but also because of excessive thinness. Although Esther's proportions are almost classic, her thin bones create the image of a very refined creature.

Like other models, Esther does not refuse offers to act in films.She made her debut in the 1999 remake of The Thomas Crown Affair, where she played a small cameo role as the film's enigmatic young girlfriend, played by Pierce Brosnan.Although in all the time that Esther was on the screen, she did not utter a word, the viewer's attention was riveted to her merciless eyes with a misty mirror gaze.

Esther is blessed with natural beauty of her body and grace of movement, which she does not need to support with exhausting diets and physical exercises. She says that the modeling business gives her the opportunity to travel, although sometimes in the thick of things and the crowd of people she feels insecure and alone. Esther combines the traits of an introvert and an extrovert. On the one hand, she is prone to reflection, and on the other, to quick and decisive action. She believes that living alone requires great inner strength. And the well-being of the model, she believes, is directly related to whether that individual is or not. Sometimes arrogance and snobbery are noticed in Esther's character. This is not surprising, she is a frequent guest at parties of the rich and famous representatives of the world. Living alone requires great inner strength. But recently her loneliness has been broken. After shooting for an advertising campaign for a new clothing line of the famous fashionable American brand DKNY, the model met the Dane Mark Vandderloh (who worked in tandem with Esther as a model). The acquaintance very quickly turned into an affair and since 1999 Esther and Mark announced their marriage.

Despite the fact that the spouses do not know each other's native languages, they have developed an excellent understanding. When asked if she cooks, Esther replies: «I cook, but only once a year.»

Esther is equally fond of participating in shows and posing for photography. She doesn't have to tune herself in any special way to show. «The excitement comes naturally,» says the model. She does not have her priorities in clothing. Outside the runway, Esther prefers clothing that is soft, loose and comfortable. «I love men's clothes, I often wear jeans and loose baggy pants, but sometimes I like to put on a luxurious evening dress and go to dinner...», — says the fashion model.

Esther Cañadas is very famous among the representatives of the elite of society, but she has not yet reached the national fame that Claudia Schiffer and Cindy Crawford have now.

Esther doesn't make long-term plans. «With such a life, you cannot make plans, because everything is constantly changing. Let's not wonder what my life will be like when my modeling career ends,» says Esther Cañadas. And today her earnings are $ 20,000 a day. In the Portfolio of modeling agencies in New York — IMG, Paris — Group, you can find her data: height — 178 cm, 90-61-91, eye color — blue, dark blonde.