Eight Spaniards arrested after returning from combat in Ukraine 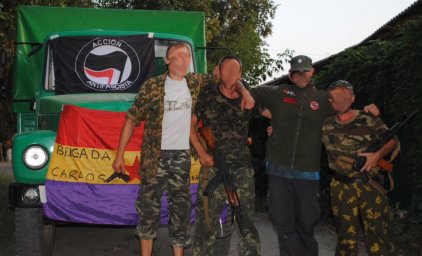 The National Police on Friday detained eight Spaniards suspected of fighting alongside pro-Russian forces in the ongoing conflict in Ukraine. The arrests took place in Asturias, Catalonia, Extremadura, Murcia, Navarre and Madrid. Three of the suspects are former members of the Spanish armed forces, and one is confirmed to have been on the frontline, according to anti-terrorist sources. The men are all aged between 20 and 30 years old.

The eight Spaniards belong to several different communist organizations, and had received support from an unofficial pro-Russian European network. The operation was completed after three of the men returned to Spain during February – the last of the men arrived last week.

Police sources have not yet stated whether Rafael Muñoz Pérez, 27, and Ángel Davilla-Rivas, 22, were among the detainees. The pair were last year confirmed to have joined the Vostok Batallion, under the orders of Igor Strelkov, the head of the Armed Forces of the People’s Republic of Donetsk.

The eight detainees are suspected to have participated in armed conflict in the Donbass region, and will be facing charges of compromising the peace and interests of Spain, homicide, and possession of arms and explosives.

The identification of the detainees was facilitated by the suspects’ habit of taking photographs of themselves with military equipment and posting the images on social networking sites. Police sources have indicated that another group of young Spaniards, also pro-Russian and linked to communist movements, were preparing to travel to Ukraine.

The operation is similar to those taking place in other European countries to prevent combatants traveling to war zones, and dissuade those who might be considering such an action. Sources have confirmed that the international network with which the Spanish detainees were working has connections in Germany, Italy and France, among other countries. Combatants have traveled from all of these countries from Ukraine, some of them via the so-called Ukraine Anti-Fascist Support Committee.

A group of Spaniards who define themselves as “anti-capitalists” told news agency Europa Press last September that they had traveled to eastern Ukraine to fight alongside pro-Russian separatists to combat the “resurgence of the Fourth Reich in Europe.” Those youngsters established the Carlos Palomino International Brigade, in honor of the young anti-fascist from Spain who was stabbed to death by a neo-Nazi former soldier on the Madrid Metro.

spaniards, Ukraine, terrorist
—
Spain
RSS
No comments yet. Be the first to add a comment!
Log in or Register to write comments