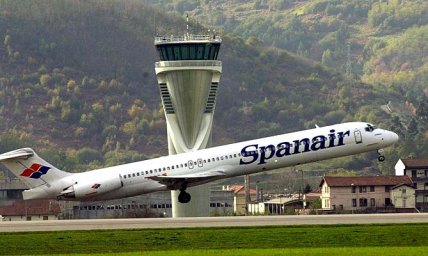 A new video of this week's Spanair plane crash showed that fire did not start in either of the plane's engines, as had been suggested earlier.

The video, taken by AENA, which runs Spain's airports, shows flight JK5022 take off and begin to climb before it crashes and bursts into flames.

Spain's civil aviation chief has said that the aeroplane that crashed on Wednesday, leaving 153 people dead, must have suffered more than one kind of failure.

Manuel Batista, speaking to El Pais newspaper on Friday, said: «There has been more than one breakdown.»

Some witnesses had said the aircraft's left engine caught fire as the plane was taking off, although authorities never confirmed this.

Contrary to those accounts, El Pais now reports video taken by the airport authorities did not show an engine explosion as the airliner was taking off.

«The video shows that the plane caught fire only after it hit the ground,» the paper said.

Batista also said engine failure alone would not be enough to bring the aeroplane down because modern aircraft are designed to fly on just one engine in an emergency.

The aeroplane's takeoff from Madrid's Barajas airport had been initially delayed because of a mechanical problem with what the airline called an air intake valve near the cockpit.

Experts, however, said the repaired valve could not have caused the crash — Spain's worst air disaster in 25 years.

El Mundo newspaper said pieces of the engine may have come off and damaged the tail of the plane.

The investigation into what brought down the aeroplane is likely to take months, although information could come from the two recovered black boxes before then.

Only 19 people survived the crash of the Spanair twin-engine plane bound for the Canary Islands.

Relatives of those killed in the crash continued on Friday to identify the bodies. Many bodies were burned beyond recognition and forensic teams are taking DNA samples from relatives. Only 50 sets of remains have so far been identified.

Madrid's regional government has set an official funeral, to be presided over by Archbishop Antonio Maria Rouco, for September 1.