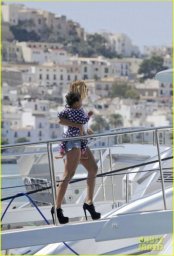 The 31-year-old entertainer jetted off to Europe right after attending the second day of the 2013 Budweiser Made in America Festival with her husband Jay Z and sister Solange Knowles in Philadelphia, Penn.

Over the weekend, Beyonce took to the stage to perform a full concert set for the crowd. Looks like she is going to get some much needed relaxation time in this week!

Singer Beyonce carries her daughter Blue Ivy onto a yacht in Ibiza, Spain on September 2, 2013.

​​Beyoncé, Ibiza
—
Spain
RSS
No comments yet. Be the first to add a comment!
Log in or Register to write comments
Related news

The Russian Cossacks arrive in Madrid
Spain 4 years ago