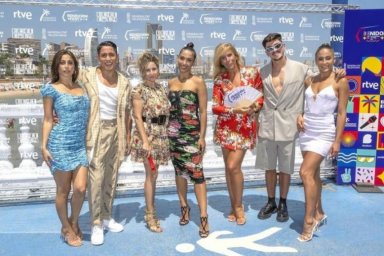 RTVE is set to reveal the names of the Benidorm Fest 2023 participants tonight, at around 22.25 CET. There has been major drama about it — are you surprised?

Benidorm Fest was thought to consist of 16 artists. However, Vertele reported today that the list could have been expanded to 18. Scroll down for further explanation on the hot mess that has gripped the Spanish fandom all day.

The announcement will come after Mapi, one of RTVE’s family entertainment shows. It will be broadcast live on La 1 on Spanish prime time. Benidorm Fest host Inés Hernand will announce the names of the participants.

If you’re reading us from the UK, you’ll know a bit about turmoil in the news, particularly after the last few weeks. What happened today for Spanish fans would be the Eurovision equivalent of Liz Truss’ resignation announcement: we all knew it was happening, just not when.

The participants were chosen yesterday, and it has been suggested that the announcement comes today so as to prevent any possible leak. Throughout the day, multiple names have emerged as possible participants, none confirmed.

RTVE has played with ambiguity for a while. The Benidorm Fest announcement appeared on their broadcast programming without further notice this morning: it was scheduled for broadcast after the news bulletin tonight, at 22.05. Inés Hernand also confirmed the show was happening on her Instagram.

Later, Vertele reported the announcement may not be airing tonight. And few minutes after, Inés tweeted she was going to RTVE, while the program disappeared from the schedule. Major mayhem.

It was speculated that RTVE would have recorded the announcement and would only release it if any contestant was leaked. The idea was to unveil the names on Saturday. I’m not sure I would have survived it, honestly.

However, minutes past 19.00, the broadcaster confirmed the show would be aired later tonight. It is expected to be at around 22.25 CET. Stay tuned for more!

This list precedes a show which RTVE will air on Saturday night with all the contestants, with interviews and small hints about their entries. Eurovision commentator Julia Varela will host it together with Rodrigo Vázquez.

They may have sung “SloMo” at Eurovision 2022, but Spain is moving in fast-forward with details about Benidorm Fest 2023. On Thursday the 27th, RTVE will reveal the full list of participants for their national selection.

RTVE will air a special programme with Benidorm Fest host Inés Hernand and TV host Rodrigo Vázquez, at 22.00 CET. All 16 contestants and some from last year will be there.

Furthermore, on Friday the 28th there will be a press conference with all of the acts.

A total of 16 acts will take part in Spain’s national selection in 2023, and RTVE is announcing the names very early. However, the songs are not expected to be released.

In fact, artists will be able to add the finishing touches to their songs during November, as some of the selected entries so far may be demos.

Last year, the songs were revealed right after Junior Eurovision, and it won’t be surprising if it happens that way again this year.

But we’ll have the names and titles, presumably, so there will be plenty of room for all sorts of fan dramas.

Benidorm Fest 2023 will take place on January 31, February 2 and February 4. This include two semi-finals with eight acts each, and a final with eight competing artists. Only one of them will snatch the Bronze Microphone and fly the Spanish flag in Liverpool.

The 16 acts entering Benidorm Fest 2023 have not yet been decided, at least officially. RTVE’s steering committee have been listening to all the 876 entries and on Monday the final decision will be made.

Narrowing down such a huge number of options is not an easy task. The committee will choose its participants, but also a series of back-ups in case something goes wrong. On Monday, all will be decided, and on Thursday, the contestants will be presented.