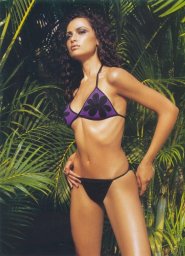 Almudena Fernandez was born on January 1, 1977 in Benavente, Spain. The family moved to Madrid shortly after her birth. As a high school student, Fernandez took part in the «Supermodel of the World» competition and took an honorable second place. This was a tremendous achievement for young Almudena, especially considering the fact that the show was sponsored by the Spanish magazine Elle.

Having won again the second position in another modeling competition, Fernandez firmly decided that she would become a fashion model. Almudena's classic Spanish beauty has caught the attention of fashion figures such as Olivier Strelli, Alain Manoukian and Lacoste and Hermés. After working with them, Fernandez went to conquer New York.

Soon, the girl signed two contracts at once: she became the face of the Aquaflore fragrance from Carolina Herrera and the French perfume Organza Indecence from the Givenchy fashion house. In 2001 she participated in the show of the fall-winter collection of Antonio Miro, Armando Basi and other designers.

Fernandez has worked for Revlon, L Oréal, Parasuco, Victorias Secret, Hanro, Bisou-Bisou, Cartier, Wolford; appeared on the cover of Elle, Cosmopolitan and other well-known magazines. Unlike her colleagues, Almudena willingly makes contact with the media and her fans.

Almudena Fernandez is a real Spanish woman, not only externally: brown hair, brown eyes, dark skin, but also inside — temperamental and sensual. Today she is one of the most famous Spanish supermodels.

Almudena lives with her lover, model Antonio Macian, in New York. Together they often go to shootings and screenings in Paris. Fernandez's career continues to develop at a rapid pace: famous brands, fashion magazines and couturiers are interested in working with the beautiful Almudena.