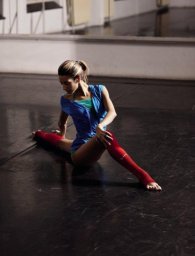 Almudena Cid was born in Vitoria, on June 15, 1980. She began to practice rhythmic gymnastics at the age of 7, at the “Arantzabela Ikastola” school.

Almudena Cid Tostado started to practice Rhythmic Gymnastics at the age of seven years. As Almudena says — «I started almost by chance; my mother was aware of my natural flexibility and, as she loves ballet, she thought that I could be good at it» — fortunately for the World of Rhythmic Gymnastics, Almudena's mother changed her mind in the last moment and made her daughter join a Gymnastics School instead. This is how one of the most brilliant gymnasts in history started her sports career.

She had exceptional physical qualities and impressive flexibility.

Almudena Cid with Club Arabatxo in 1986

Subsequently, she joined the “Club Arabatxo Gimnasia”, founded in 1986 with the aim of contributing to sports life in Vitoria.

Illustrious names such as Almudena Cid, Tania Lamarca, Ortzi Acosta, Victor Cano and Rafael Martínez have passed through its rooms.

In the 1993 Individual Spanish Championship, held in Valladolid, Almudena was 5th in the junior category.

Almudena spent some years training in her first school where her coach noticed her great flexibility and talent for the sport. Later on, she entered the Rhythmic Gymnastics Competition Club «Beti Aurrerá» training with great coaches such as Iratxe Aurrekoetxea and Aurora Fernández. Almudena progressed very quickly and comp