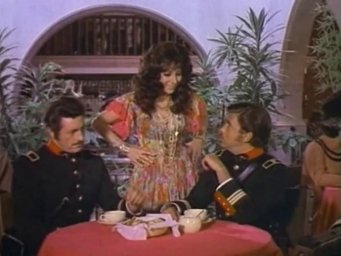 Jacqueline Andere ("The angel of extermination") and José Lavat ("Witch Doctor") in the historical melodrama "Yesenia".

The gypsy shop can be found on the road to any country in the world. And where the gypsy tambourine trembles and spreads the stores of the tabor, boiling passions boil over. Love and jealousy, loyalty and betrayal, whirlwind of incendiary music and intriguing intrigue capture the attention of the spectators from the first minutes of the film.

Melodramatic story of a girl Esenia, born out of wedlock and in childhood, given by her own grandfather to gypsies, who wanted to hide the misfortune of her daughter. When educated in the camp, Yesenia became a true gypsy: lover of freedom, proud, evil. The fervent love of Osvaldo, an officer in the insurgent army of Juarez, and his marriage completely changed his life. The sudden disappearance of Osvaldo, who was taken prisoner, takes Esenia back to the camp. The case and the assistance of the old gypsy Mahshita give back to Esenia and her own family, and to the beloved Oswaldo, with whom she concludes a marriage.

Yesenia is one of the most popular melodramas on the gypsy life in our country, as soon as the film premiered on the country screens, it was an amazing success. The name of the protagonist for months did not disappear from the posters of the cinemas, gypsy dresses and skirts like Esenia were in fashion, and many parents called their daughters this beautiful name, Yesenia.