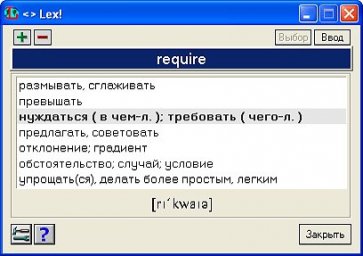 Tutorial to learn and memorize foreign words. With the help of Lex! You can learn different languages, and learning foreign words becomes more efficient and easier. Feature of the Lex! is that it appears periodically on the computer screen, offering to repeat foreign vocabulary. The program is designed taking into account a series of characteristics of human perception, attention and memory.

Anyone who has started learning Spanish, I advise you to download the Lex program! and three dictionaries. Why three? First, in the three dictionaries, the most common words, or rather, this is not a dictionary as such, but only common words that are often used in conversations. The first vocabulary consists of 521 words and, to begin with, you can study these words, then, in the near future, there will be two more dictionaries. Well, at the end of a large one, accommodate three dictionaries in one. The verbs in these dictionaries are used individually indefinitely. In the future, it is planned to create a complete dictionary with a capacity of 7,000 words, but this is still far away.