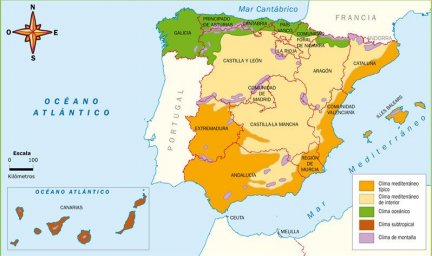 There are three climatic types: continental, tempered in the Meseta and the Ebro; Mediterranean in the south and east; and ocean, north, abundant and low thermal oscillation annual rainfall.

Spain's climate is predominantly Mediterranean, especially on the Mediterranean coast and the Balearic Islands. It is characterized by mild, except inside winters or mountains, and very hot summers, with rainfall usually insufficient, although the various physical characteristics of the country determine pronounced climatic differences. Along the shores of the Cantabrian Sea and the Atlantic ocean climate it is generally warm and humid. The Central Plateau is Continental or indoor Mediterranean climate with dry summers so many streams dried, the earth dries up and droughts are frequent. Most of Spain receives less than 610 mm annual rainfall; the mountainous regions of northern and central are wetter. In the downtown area, the winter is very cold, while summer temperatures can be raised to over 40 ° C. In contrast, the southern Mediterranean coast enjoys a subtropical climate; Malaga has the mildest winter in Europe, with 12.5 ° C average monthly temperature in January. The Canary Islands have a tropical, warm and dry; Santa Cruz de Tenerife is 17 ° C average temperature in January.

weather
—
Spain
RSS
No comments yet. Be the first to add a comment!
Log in or Register to write comments