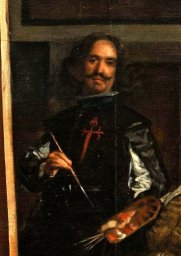 Spanish painter regarded as the best in history, Diego Rodriguez de Silva y Velazquez was born in the city of Seville on June 6, 1599. He received his first artistic education of Francisco Herrera the Elder. From 1611 he was led by Francisco Pacheco, author of the treatise «The Art of Painting». Six years after Diego Velázquez was already a painter safe. Young established his own workshop without breaking relations with his teacher who, in 1608, granted the hand of his daughter. Not only that, but Francisco Pacheco became one of his most loyal followers and practitioners of his style.

Velázquez cultivated the naturalistic style, with a masterful use of light and colors. Although in the beginning he tried to break the Renaissance influence, greatly he admired the work of Titian and Caravaggio. He showed special sensitivity to the popular reality, but also to spiritual and religious themes. This time out from his works: «Old Woman Cooking Eggs» (1618), «Men at the table» (1619-1620), «Merchant of water in Seville» (1620) and «The Adoration of the Magi» (1619) .

However, Diego Velázquez wanted to enter the court of Philip IV and the target moved to Madrid in 1622. It did not take long to become the painter to the king. There he painted the portraits of the monarch, the Duke of Olivares and other members of the court, which increased respect for the monarch basin artist.

In 1629, Velázquez traveled to Italy with the permission of Felipe IV and two years later resumed his duties at court. Of this time, are the paintings of dwarfs that gave life to the environment of the royal palace. The result of his work beat Diego Velázquez a growing admiration and constant promotions in court.

In 1648 the painter traveled back to Italy with the task of acquiring works of art to enrich the collections of the king. Back in Madrid, he made great character portraits of the royal family, but none of these works with the charm of «Las Meninas» (1656). Diego Rodriguez de Silva y Velazquez died on August 6, 1660 when enjoying the best time of his successes as an officer and royal diplomat.