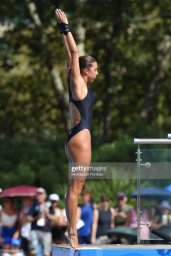 Valeria Antolino Pacheco (born 30 August 2002) is a diver who competes internationally for Spain.

At the table of judges of the South American dives, the presence of another Trujillo woman stands out.This is Wylmarlen Pacheco, the well-known leader of the same Diving Club that trained Ariza and so many other athletes.

Among them is his own daughter Valeria Antolino Pacheco, another international, who today triumphs with the Spanish team and is also part of the Olympic cycle heading to Paris 2024.

Antolino Pacheco continues to conquer Europe.The Royal Spanish Diving Federation has it as one of the great Olympic hopes

The typical reunion of athletes and sports personalities from Trujillo after the New Year's Eve festivities, as well as after the traditional mass, made one of the great figures from Trujillo who makes a sports career abroad, be seen again in these lands.

Valeria Antolino Pacheco, diving, diver
—
113
Spain
Tweet
RSS
No comments yet. Be the first to add a comment!
Log in or Register to write comments
Ads