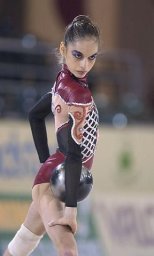 Member of the National Team since 1997

Nickname: Any, Ana
Birthday: 12th September 1982
Birthplace: Córdoba, Argentina
Residence: Córdoba, Argentina
Stature: 1,62 m.
Weight: 41,00 Kg.
Languages: English and Spanish
Discipline: Individual
Club: Municipalidad de Córdoba
Coach: Silvina Márquez
Started with RG: 1990 (7 years old)
Because: She used to play and train Tennis, but, some daywhen she gone out of her training, she saw a lot of hoops, ribbons and balls and she attracted the Rhythmic Gymnastics movements. Since that day, she started to train the Rhythmic Gymnastics and she found out that it was her real vocation.
In National Team: 1993 (10 years old)
Weekly Training: 42 hours
Sportic Aim: The Olympics Games, World Championschip Austria 2001 and Panamerican Games 2003 (Santo Domingo)
Biggest Motivation: Surpass herself and to feel pleased with herself.
After RG, would like to: To be an Actress
Favourite Gymnasts: Yulia Raskina, Irina Tchaschina
Favourite Apparatus: Clubs and Ribbon
Contact Adress: abat@arnet.com.ar 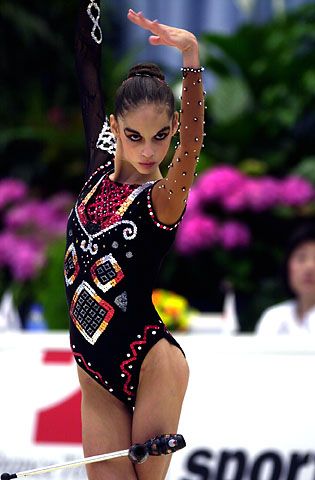 Anahí Sosa was born 19 years ago, more precisely on September 12, 1982. The city of Córdoba (ARG) saw her grow up and enjoys her sporting achievements.

This gymnast is characterized by her great flexibility, enormous strength and tremendous expression. Her passion for the sport she loves is demonstrated in her hard-working 8-hour daily training sessions at the Club Municipalidad de Córdoba under the supervision of her coach, Prof. Silvina Márquez.

Her first great achievement was achieved in 1991, when she became National Team Champion, at just 9 years old.

The following year he obtained the Provincial and National scepters and in 1993 the gold medal of the National Club Tournament.

The victories continue in 1994, when she obtains gold again in the National Clubs and is classified as Subchampion of Argentina. But the most outstanding fact of her is her international debut, getting the 3rd individual place in Chile (with a bronze medal in maces).

A year later he obtained the silver medal in the Youth South American Tournament held in Lima — Peru (being a finalist in rope and hoop). He also gets, once again, gold in the National Club Tournament.

In 1996, he maintained his habit of taking gold in the National Club Tournament and the Argentine Subchampionship. This year he makes his debut in the Club World Cup (Junior category) bringing 14th place from Tokyo — Japan. In the Youth Pan American he achieved the 4th individual position and is a finalist in three apparatus (achieving silver in rope).

During 1997 he entered the Senior category, which does not prevent him from staying with the Argentine Subchampionship. Ukraine, France, Bulgaria, Australia, Colombia and Germany see their first steps at the Elite level of Rhythmic Gymnastics. 93rd in the World Championship, 10th in the Four Continents Tournament and 6th in the Pan American show that the change in category did not affect Anahí's enormous temperance.

But it is in 1998 when her consecration takes place by reaching for the first time the title of National Rhythmic Gymnastics Champion, obtaining first place in all the Argentine tournaments in which she participated. In addition, she achieved 43rd place in the Moscow Youth Olympics — Russia and the 6 gold medals of the María Marino International Tournament (Santiago — Chile). She also participates in the Odesur Games (Cuenca — Ecuador) and is classified South American Champion with 6 gold medals: individual, team and in the rope, ribbon, club and hoop finals. 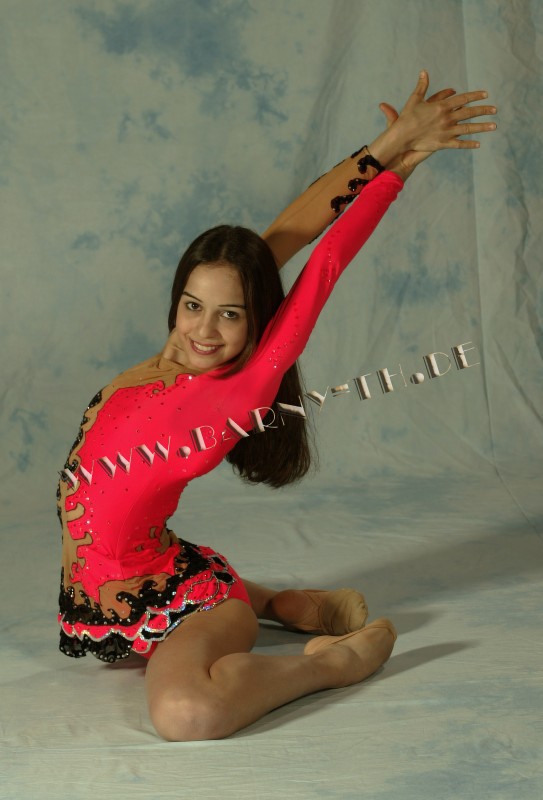 In the years 1999 and 2000, he retained the Argentine scepter in the National Tournament, successfully participated in the Corbeil Essones Tournament (France), the Aeon Cup (Japan), the Chichmanova Tournament (Bulgaria) and the Córdoba Cup (in his hometown). His grace travels the world and the F.I.G. she declares her an «international level gymnast.»

Share podiums with the top stars of world Rhythmic Gymnastics, such as Teodora Alexandrova (BUL), Elena Vitrichenko (UKR) and Alina Kabaeva (RUS). She is also invited to train at the Levski Club in Sofia — Bulgaria (cradle of this sport).

In 1999, Anahí Sosa obtained the highest placement ever achieved by an Argentine gymnast in a World Cup (64th position in Osaka — Japan) and the highest score in the history of Argentine Rhythmic Gymnastics (9,612 with the ball in the Aeon Cup played in Tokyo — Japan). That same year she finished 7th at the Pan American Games in Winnipeg — Canada, where organizational errors conspired against her performance that she could have qualified for the 2000 Olympics in Sydney — Australia.

Anahí Sosa, gymnast, rhythmic gymnastics, argentinian
—
104
Spain
Tweet
RSS
No comments yet. Be the first to add a comment!
Log in or Register to write comments
Ads