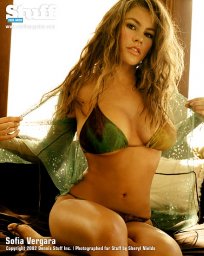 This Colombian export was born on July 10, 1972, in Barranquilla, Colombia. «La Toti», as her family referred to her, was extremely close to her family, which consisted of five brothers and sisters and many cousins.

A quiet child, Sofia studied a lot and took school very seriously. When her nose wasn't in the books, she surrounded herself with music, whether it was watching her family singing, dancing and playing instruments, or listening to her favorite group Menudo (Ricky Martin's claim to fame before he was Livin' la Vida Loca).

A playful child who loved Barbies, Sofia also spent a lot of time on her father's farm, where she swam in the river and rode horses. Sofia was a student at a private bilingual elementary school where she not only got to learn and perfect her English skills, she developed tight, lifelong friendships. As for boyfriends, she only has 5 ex-boyfriends, the most significant being the father of her son, Manolo.

Married to her boyfriend of 4 years at the age of 18, her ex-husband gave her the greatest gift of all; her son, who is now 8 years old. After Manolo was born, Sofia was set on becoming a dentist, but she was faced with a change in career paths.

She is a Columbian American actress, one of the biggest stars of our generation. Her beauty is very stylish, she does not miss the chance to show them off at the red carpet. She impressed everyone when she wore this Zuhair Murad dress, that fits her incredible figure, at the NBC Golden Globes After Party last 2014. She wears on her feet a pair of shoes by Brian Atwood. Take a look at that dazzling smile that she had on us when she made her way down the red carpet.