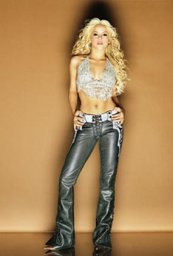 Shakira in 2006, during the «Oral Fixation Tour»

Shakira is a two-time Grammy Award and eight-time Latin Grammy Award-winning Colombian singer-songwriter, musician, and record producer who has been a major figure in the pop music scene of Latin America since the mid-1990s. In 2001, she broke through into the English-speaking market with the release of her first album in that language, Laundry Service, which has sold over 3.5 million copies in the United States and 15 million copies worldwide. Shakira is the highest selling Colombian artist of all time, having sold nearly fifty million copies of her albums, and the only artist from that country to reach the number-one spot on the Billboard Hot 100 and UK Singles Chart.