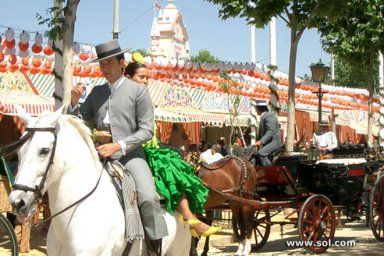 This lively southern city on the Guadalquivir River combines the glories of Moorish and Christian Spain in its great cathedral and La Giralda, its bell tower, and in the lavishly decorated royal palace of the Real Alcázar.

Visitors also flock to Seville to relish the exciting atmosphere, particularly in the whitewashed streets of the Santa Cruz quarter and, when there’s a fight on, in thePlaza de Toros de la Maestranza, Spain’s most famous bullring.

Seville is even more animated during the intense celebrations of Semana Santa (Holy Week) and the passionate April Fair that follows, when the city hums to the sound of Sevillanas, its own brand of flamenco.

The parade of the Virgin during Semana Santa, Seville

Seville is located in the Southeast of Spain. A provincial capital, seat of the government and parliament of the Comunidad Autónoma de Sevilla (Regional Government). It has more than 700,000 inhabitants, nearly half the population of the whole province. The city of Seville is located on the plain of the Guadalquivir river which crosses the city from North to South. The river can be navigated from Seville all the way to its outlet near Sanlúcar de Barrameda, on the Atlantic coast. In the past the port of Seville played an important role in commerce between Spain and the Americas and it remains today one of the most active river ports of the Iberian peninsula.

The Tartessians were the original founders of Hispalis. Next to this settlement, in 207 B.C., the Romans built Itálica. It was the centre of their Western Mediterranean dominions for seven centuries until the Roman empire was overrun by Northern barbarians at the beginning of the 10th century. The long Moorish occupation of the Iberian peninsula, from 711 A.D. to 1248 A.D., left indelible traces in Seville as in all of Al-Andalus. La Giralda, the tower of an important mosque, is the most well-known of the remaining Islamic monuments. In 1492 Seville played an important role in the discovery and conquest of America. The 17th century was a period of artistic splendour in Seville. Painters such as Velázquez, Murillo and Valdés Leal, and sculptors like Martínez Montañés were born in Seville and left behind important works. The city also assumed an important role in world literature and was the birthplace of the myth of Don Juan. On two occasions in the 20th century Seville has been in the spotlight of the world's attention. In 1929, it hosted the Latin American Exhibition, which left important urban improvements in the city. More recently, Expo 92 reinforced the image of Seville as a modern and dynamic city.

Don't miss out on the tapas. The city is credited with the invention and has more than a thousand bars where the choice of food, is virtually unlimited, from seafood to ham and sausage and from vegetable to cheese. The Sevillians actually make a meal of. them, moving from bar to bar and trying one dish at a time.

Sevilla
—
Spain
RSS
No comments yet. Be the first to add a comment!
Log in or Register to write comments