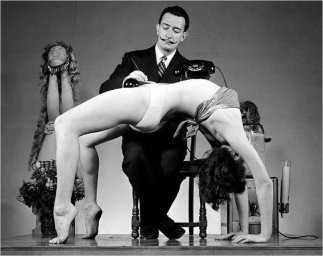 Full name led Felipe Jacinto Dali Domenech. He was born in Figueras, Spain, on May 11, 1904. His father, a notary in good economic position, Salvador sustained studies in Barcelona and Madrid. In the latter city, between 1921 and 1926, he attended the National School of Fine Arts.

During that time, the young artist took in many styles and theories about art. He also acquired influences of Cubism, Futurism and Italian metaphysical painters of the twentieth century.

By 1929, Dalí joins the Surrealist painters in Paris. It soon becomes along with Andrew Breton in one of the movement's leaders. It also takes the lead of the international reaction against abstract art.

His hand gave birth paintings and drawings that seem to belong to another world. Signs of this are «The grim game,» «Dream» and world famous, «Persistence of memory or soft clocks».

Dalí also a painter, was an illustrator, designer, writer and sculptor; He also wrote several books of essays (including «Diary of a Genius») and poetry. He collaborated with Luis Bunuel, Garcia Lorca, Vicente Aleixandre. His undeniable originality is seen in both his work and his person. Suffice it to say that he turned his house into a museum in Figueras surrealism. To the horror of the Church, he painted his wife, Gala, an image of the Mother of God.

Salvador Dali died on January 23, 1989 at a hospital in his native Figueres, cause of heart failure.