Spain is the best country to retire 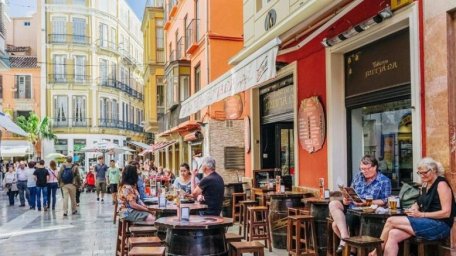 According to a study by Blacktower Financial Management Group, Spain is the best European country to move to for pensioners. And, to tell the truth, many have already moved to the Iberian Peninsula. Although, to be more precise, the Canary Islands are among the most popular destinations.

In fact, as the report states, Spain leads this special ranking thanks to «numerous large cities and coastal resorts that attract millions of pensioners. The good weather, food and friendly locals also make Spain the perfect destination for anyone looking to relax during their golden years.”

The results contained in the report were obtained using weighted metrics of the cost of living, crime rates, life expectancy, property prices and population age.

Sunny Spain is cheaper than much of Europe, particularly a few miles away from the gorgeous coasts and big cities. Healthcare is considered excellent. Crime rate is low. Visas for U.S. retirees are relatively easy to get upon a showing of adequate annual income, roughly $36,000 for a couple. A tax treaty between the U.S. and Spain eliminates many double taxation issues. Knowledge of some Spanish is a must. There are nonstop flights back to the U.S. Inviting venues include the Costa del Sol along the Mediterranean, Bilbao and the Orange Blossom Coast near Barcelona.

The best places to retire in Spain

Spain is one of the best countries in the world to retire to. Retirement, the so called 'golden age'; you leave the world of work behind and retire after years of paying contributions and your pension comes along that allows you to enjoy a relaxed and leisurely life. Nowadays, many countries are going through a severe pension crisis, not to mention the minor complications as a result of Brexit. In spite of this, Spain is still one of the best places to retire in 2022 and 2023.

Moving abroad and enjoying a relaxed retirement as a British expat is an attractive option for many and there are countless options for those who have already retired or see retirement coming on the horizon. If you're considering moving abroad for this 'golden age' in your life, you may however find yourself bombarded with choices.

We have put together a list of the best places to retire in Spain in 2022 and 2023, taking into account the cost of living, safety, pensions, healthcare and visas amongst other factors, and Spain turns out to be one of the best countries to retire to – let’s have a look at which regions are best for retirement in Spain, and other important questions about retiring in Spain. From the best places to retire in Spain by the sea, to retirement villages and cities, there is somewhere for everyone.

The Costa del Sol: Retire by the sea

The Costa del Sol is one of the most important tourist areas in Spain, especially for people flying in from the U.K. and one of the best places to retire in Spain by the sea. The Costa del Sol has more than 1.3 million inhabitants, a large community of expats and English speakers that are spread throughout the area which is located in the Malaga region, from the luxurious Puerto Banús in Marbella, to the bustling beaches of Nerja, Benalmadena and Fuengirola. The Costa del Sol is perfect for pensioners who want a lively and active lifestyle — especially for those who enjoy a round of golf, given the province's fame as home to some of the top golf courses in Spain and Europe. The region also has a range of smaller towns and villages which are great for pensioners and some of the best retirement villages in Spain.

Moving up the coast, the lesser known Costa del Azahar, also known as the Orange Blossom Coast, is in the province of Castellón and is made up of 120 kilometres of stunning sandy beaches and coves. Another great option for those who whish to retire in Spain by the sea, and located just over one hour’s drive from Valencia, this golden coast gets some of the best weather in Spain and is a welcoming area for English speaking expats, as well as being an affordable option for pensioners. The population in the Costa del Azahar is more scarce than in the Costa del Sol, meaning that even in the capital you’ll be in peace. The main cities of interest include Benicarló, Peñíscola, Torreblanca, La Llosa, Benicasim and Oropesa. And if you prefer life in a bigger city, you can also opt to retire in Valencia Spain just a short distance away.

The Spanish city of Bilbao, located in the Basque Country in Northern Spain, also makes our list of the best places to retire in Spain. This is perhaps a more surprising addition for some, as expats moving to Spain to retire tend to gravitate towards the southern coast. However, due to the high quality of life and low crime rate, it’s an ideal destination to those who don’t want to just spend their retirement on the beach, as well as a spot for enjoying mild summers without the intensity of the heat of the South and Mediterranean coasts. Bilbao is also known for having one of the best healthcare systems in Spain and also has a growing English speaking community, making it a worthy choice for your hard-earned retirement in Spain.

Madrid: the best quality of life for pensioners

Madrid has a high quality of life for pensioners

According to a study by the British real estate company, Audley Village, Madrid is one of the best places to retire in Spain because of its high quality of life. Once again, Madrid is for those who want to stay clear of the coast, but with excellent transport links, a buzzing cultural scene and lots of English speakers, you're sure to find plenty to do! Madrid also has one of the highest life expectancy rates in the country at almost 84, while in Spain's capital, retirement is also the second longest in Europe averaging at 22 years. Madrid also has a great safety record, pushing to close to the top of the ranking of the best cities to retire in Spain.

How much does it cost to retire in Spain for British citizens?

Is it expensive to retire in Spain? In general terms, retiring in Spain is cheaper than much of Europe. But how much do you need to retire comfortably in Spain? It’s possible to retire comfortably in Spain on about 22,000 pounds per year, even with the rising cost of living and inflation. That breaks down to just over 1,800 pounds per month with average rental prices and property prices also considerably less than other countries. It is of course possible to live in Spain for less if you decide to live farther from the big cities and lead a more minimalist lifestyle, making Spain one of the most affordable places to spend your retirement.

What about pensions if you’re thinking of retiring to Spain?

First and foremost, as a British citizen, you have the obligation to notify the UK government offices that deal with your pension and tax if you are retiring abroad.

Retiring in Spain as a Brit does however mean you have various options regarding pensions: You are entitled to one of the following options:

Retiring to Spain after Brexit

Can I Retire in Spain after Brexit? Now that the dreaded Brexit is here, one of the biggest questions comes from British citizens who have retired overseas or are planning to do so. The UK government has stated that it will continue to pay a State Pension to those eligible in the European Union after Brexit.

In spite of Brexit, things shouldn’t change too dramatically, and the necessary agreements have been reached so that British pensioners in Spain won’t be left out of pocket. Take note that if you intend to stay longer than three months, you will need to apply for residency in Spain. Find out more about what Brexit means for expats living in Spain, including new residency documents.

Is retiring to Spain a good idea?

So, to round things up, is retiring to Spain a good idea? Most definitely! Retiring to Spain has a lot of benefits for expats, including a lower cost of living compared to other countries and an excellent healthcare system, all of which leads to a higher quality of life.

The Basque Country, Navarra and La Rioja
Spain on the Map
A portrait of Spain
Ads