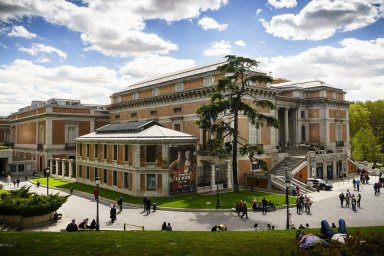 The first idea of creating a museum in Madrid it was suggested to Charles III by his court painter Anton Rafael Mengs. But the desire of the painter was not a suggestion, because the king did not theirs.

Already in the late eighteenth century, in the Paris of the Revolution, it was created the Louvre. This was the starting point for the creation of many museums in Europe. The first official initiative seriously and King Joseph Bonaparte was due.

Curiously he was committed to the establishment of a similar museum in 1809, precisely during the war against French rule.

The idea caught on in the reign of Fernando VII who knew heed the requests. But the special interest in the project began his second wife Maria Isabel de Braganza. The Museum has always considered as its founder wanted. Unfortunately, the queen died without seeing the inauguration of the Royal Museum of Painting and Sculpture was called. This first step took place on November 19, 1819.

The shipment of the first artworks came from the royal collections. It exceeded fifteen hundred, but the museum opened just over three hundred for lack of space. The building was built very slowly, and paintings hung very tight. In addition, dependent living in the museum itself, which made it up to fear.

There was a great occasion for journalist dared to publish false news of the fire museum. The imagined loss of all funds had some immediate effects. First banned painters set up their workshops in the museum. Soon twin pavilions housing were built dependents.

By then the museum's collection remained personal property of the king. The museum is open one day a week and very narrowly: special permission of the court was needed.

By the twentieth century the museum made great progress in both its architecture and administration. The Civil War in Spain marked an abrupt halt to this development. As Madrid was the war front from the first MTSES of the war, the museum was in constant danger. He dined the public and his paintings were removed to protect them from the bombing.

It was then that he decided to take Madrid the most important pieces. The paintings were moved to Valencia; then at Gerona. Finally they were in Geneva under the aegis of the League of Nations. In this city an exhibition «Prado» that was repatriated in a hurry and risks triggered World War II was organized. With much of Europe and bombed by the Germans, the treasures of the Prado had to cross French territory in night trains, escaping aviation.

After the hard, difficult and long war, the beginning of the tourist phenomenon was a revival of dormant museum and a dramatic increase in visitors.