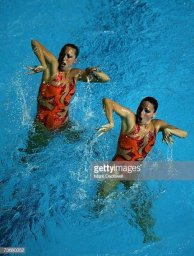 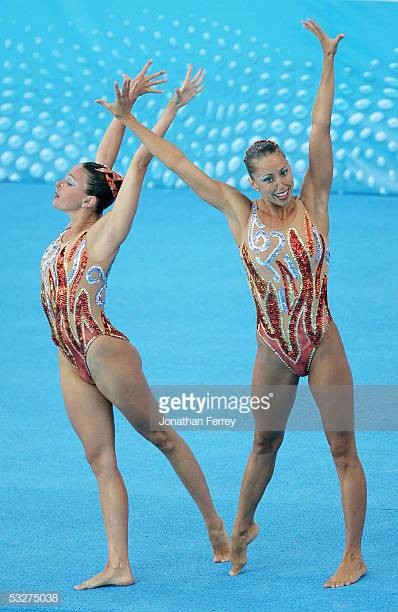 Gemma Mengual and Paola Tirados of Spain pose at the beginning of their silver medal synchronized swimming duet final rountine during the XI FINA World Championships at the Parc Jean-Drapeau on July 22, 2005 in Montreal, Quebec, Canada

The 'synchro' is difficult, it's bad, but I enjoy it

Spanish swimming continues to harvest elite athletes. This time, the protagonist is Paola Tirados from the Canary Islands who, together with her partner Gemma Mengual, has placed Spain among the first powers in synchronized swimming. AULA introduced you to Gemma last week, but since the two are inseparable, today she wants to bring you closer to Paola. She is 24 years old and when she stops swimming she wants to be an architect.

Spanish sport has a new chapter entitled Paola Tirados. The story begins in the water, in a pool where a three-year-old girl from the Canary Islands, Paola, is learning to swim. Next to her is her mother. Today, 21 years have passed since this stamp and that little girl has established herself as one of the greatest representatives of Spanish synchronized swimming. Her name is Paola Tirados.

“Synchro isn't easy, it's pretty bad; you have to work hard with your legs and arms in the pool until the exercise comes out. But despite all that, I enjoy what I do”, Paola confessed to AULA.

Paola gets up every day at half past seven in the morning. She has breakfast and gets ready to start training at eight at the Sant Cugat High Performance Center (Barcelona). The gymnastic table begins with an hour and a half of activities to exercise her flexibility, do acrobatics and weights. It seems that it is little, but this is only the beginning. At half past nine, Paola jumps into the pool to continue her training until half past twelve. At three she returns to the water, until half past six in the evening. Undoubtedly, her life is linked to water, but to sweet, because she can only enjoy salt when she goes to her land, in Las Palmas de Gran Canaria.

This hard work has paid off. Paola hung the bronze medal in the Swimming World Championships in Barcelona in July, along with her partner Gemma Mengual. The achievements of this duo have elevated Spain to first place among the world powers that are dedicated to promoting synchronized swimming.

“Dancing and swimming have a lot to do with it, you just have to interpret with your body in the water”, says Paola.

At 24 years old, this synchro professional has not forgotten her studies. Her biggest dream is to be an architect, in fact, she is studying Architecture in Barcelona, where she has lived alone for seven years. Her family continues to live in Las Palmas.

“It is difficult to combine the university and this profession, but I do not falter and I carry it in unison”, says Paola. She is very clear about it and when she leaves the sport she wants to dedicate herself to architecture and teach swimming.

THE C.O.M.E.N. The Mediterranean Swimming Confederation, which celebrates annual championships, is known by this name. At the age of 14, Paola came first in the solo and team modalities.

EUROPEAN CHAMPIONSHIPS. The swimmer participated in the Junior European Championships, in which she once again excelled, with a bronze medal in solo, and fourth place in duet and team. In this year's edition, she Paola won a well-deserved second prize in these two modalities.

SYDNEY 2000. At the age of 20, he was part of the Spanish team that attended the Sydney 2000 Olympic Games. Gemma and Paola were in seventh position, although the first news they received was that they had finished in eighth place. «No one knows how to answer in which position we are,» explained Paola.

BARCELONA WORLD CUP. In this competition, the bronze went to the Spanish. Gemma and Paola competed in seventh place, but they did not stop being one of the first favorite couples in the world cup. This duo started working seven years ago, when both swam together for the first time. They have become the emblem of Spanish synchronized swimming.

GREECE 2004. Paola's next bet is the Olympic Games in Greece, in 2004. But first she must prepare for the European Championship to be held in May, in Madrid. The swimmer is sure that both she and Gemma will participate in the Olympics. The High Performance Center of Barcelona is the place where this duo prepares every day to demonstrate their qualities in the upcoming championships.

Spanish synchronized swimming has achieved a total of 13 medals in the history of the absolute European Championships of the specialty. All have been achieved in the 'Mengual era' from Helsinki 2000 to Budapest 2006. And we say 'Mengual era' because Gemma has been the protagonist in the 13 medals won by the disciples of Anna Tarrés, who once again aspire to conquer more metals with which to fatten his legend in the imminent Europeans of Eindhoven 2008.

Although the collection of Spanish synchro medals began at the Helsinki 2000 European Championships, continental history takes us to Bonn 89, where the 'López Generation', led by the distinguished soloist Eva, achieved a commendable 5th place in solo.

Then came the Athens 91 and Sheffield 93 championships without much news, before Vienna 95, where Spain was going to place fifth in Europe in solo, duo and team with a renewed team with Gemma Mengual, Irina Rodríguez, Gisela Morón and Paola Tirados as main references.

In Sevilla 97, fifth place was repeated in solo (Mengual), and he was closer to the medal (4th) in duo (Mengual-Rodríguez) and team. She repeated positions in Istanbul 99, this time with Paola Tirados as a duo substitute for Irina Rodríguez.

As the medals were a matter of time, in Helsinki 2000 the first three metals came in solo (Mengual, bronze) and in duet (Mengual-Tirados, silver), with the team being fourth. Berlin 2002 certified Finnish success with bronze in solo and silver in a duet and finally in a team with Mengual, Corral, Andrea and Tina Fuentes, Montero, Rodríguez, Sanz and Tirados, with Morón, Rabanal and Serrano as reserves.

And Madrid 2004 arrived, with the best performance in the history of the Spanish syncro. They were on the podium no less than four times: Solo (Mengual, bronze), Duo (Mengual and Tirados, silver), Team (Mengual, Corral, Andrea and Tina Fuentes, Montero, Rodríguez, Sanz and Tirados, silver) and the historic first gold in the combo modality with Mengual, Corral, Morón, Andrea and Tina Fuentes, Montero, Tirados, Rodríguez, Sanz and Serrano.

After the bath of crowds in Madrid, in the last European Championships in Budapest 2006 Spain won no less than four silver medals with the new additions of Thais Henríquez, Laura López and Alba Cabello. The bar for Eindhoven 2008, therefore, is very high considering that in order to improve it would be necessary to make the qualitative leap of winning in some of the modalities to the Russians, current Olympic, world and European champions.

Paola Tirados Sánchez, synchronized swimming
—
102
Spain
Tweet
RSS
No comments yet. Be the first to add a comment!
Log in or Register to write comments
Related