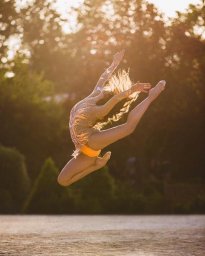 Gymnast of the Spanish National Team in Rhythmic Gymnastics since 2008. She's training in CAR San Cugat under Iratxe Aurrekoetxea's orders.

Natalia García Timofeeva has been five times individual Spanish champion in the general competition counting all categories: 1st in juvenile (2005), 2nd in children (2006 and 2007), 1st in junior (2008) and 1st in junior honor (2009). She has also been runner-up in Spain six times in the honor category (2011 — 2016) and bronze in 2019. Among other awards, she also has several more individual, apparatus and group medals. She retired on November 13, 2021 at the 6th Ciutat de Barcelona International Trophy after more than 20 years in the world of gymnastics.

— This year I will not be able to enjoy the Spanish championship with all of you as I wanted, due to an injury that I have been suffering for a few weeks. It has been very difficult to make this decision, but for my health and looking ahead to the world championship in August, we have decided to stop and start the recovery, because if I pushed more, I could have been unable to compete anymore this season. I want to wish all the participants good luck, and I hope to be able to fight very soon. A hug from the heart.

I come back here after a while because I have important news to give you.

This season will be my last year on the tapestry. It has been a year with many setbacks, I tore two ligaments in my ankle in April and despite my efforts and sacrifice to be 100% on track, injuries and my 25 years have caused changes in my body.

However, I want to make it clear that I will face this last season with all my desire, my strength and above all my heart. After more than 10 years at the top of elite sport, I'm still fighting, and I'm still doing it for myself. Gymnastics is my life and that is why I will do everything in my power to get the Olympic place for Tokyo 2020.

I want to thank all those people who continue to trust me and without them it would not be possible to have reached this point, my family, my technical and medical team, nurses, physios, my psychologist, my sports coach and all my fans, without you. none of this would have been possible.

THANKS FROM MY HEART

Natalia García Timofeeva, a former Spanish rhythmic gymnast, has just retired from this sport but is already immersed in another discipline: teaching stretching

It has been barely a month since Natalia García Timofeeva announced her retirement from rhythmic gymnastics after more than twenty years dedicated to this discipline. Taking into account that she is 27 years old, only one year younger than me, during the interview I was curious to know what a seven or eight year old girl does when she starts in this elite sport that is so sacrificed.

For example, after school I would go for my birthday, to some sporadic extracurricular activity or to play with friends (always after doing my homework, of course), but that only happened to «normal» children. This Catalan, after her classes, had to train for about four hours. And you will wonder, how long? As she tells it, she has been part of the Catalan team since she was nine years old, which requires a certain level of involvement. The Spanish rhythmic section came only a few years later.

But it has not been an ordeal for her «not living» some childhood events. Rhythmic gymnastics, which has just lost a humble and struggling athlete, has given her a lot, as she admits:

«I was the one who told my mother to start in this sport. I have Russian roots and my grandmother was a champion in artistic gymnastics in the USSR — at that time rhythmic did not exist — and my mother followed her path, although she did not make it to the national team. Let's say that I carry it in my genes, and my mother always tells me that if she had been her for me, since she was three years old she would have already been practicing it.»

Apparently, starting at such an early age was not something she wanted for her daughter because she knew the drawbacks and the long journey that awaited her, but the desire and effort, once again, show that it is worth it.

«I had conditions because I was a very flexible girl, and if I had not started in rhythmic I would not be the person I am today, with all the good things and values that this sport has taught me, such as the desire to excel and commitment», he assures.

However, there is a dark side to this Olympic activity, which makes me think that it also exists in many other sports: Natalia García Timofeeva admits to having felt unprotected at numerous times in her career. Her family and friends have always been there but not those who work within the same team.

«I have had hard times that have been very bad because I have also had no luck with injuries. It is in these moments, when the athlete is lower, when they stop supporting you. It turns out that you break your hip, for example, and in your recovery you have to show again that you are worth being there, that you are useful for your team to select you again. That is, in addition to taking care of your injuries, your diet, etc., you have to show that you deserve the place you had. So over and over again. Rhythmic gymnastics has given me a lot but it wears on a psychological level.»

The comparisons, never good, also make a dent in someone who is clear about what they are worth.

«I have spent my entire career proving that I am the one for this or that. Then, instead, you compete or exhibit in another country and they do know how to value and qualify you as you deserve. There are gymnasts who are worth a lot but end up getting tired and get lost along the way because due to favoritism or convenience they choose another. I have always fought because rhythm is what moved me and made me happy; I deserved my place and that is why I have continued until now, but more impartial personnel are needed.”, says the former gymnast.

Fortunately, she has kept her feet on the ground, even when she was competing for the Tokyo 2020 Olympic Games, held in 2021. In addition to rhythmic, she has always had in mind training for another activity, in this case for stretching.

«After rhythmic there is another life and around the age of 22 I began to think about what I wanted to do after this. I have been trained in San Cugat del Vallés (Catalonia) and from a very young age they instilled in me that it was necessary to carry out two parallel careers. At a professional level, there have been many athletes who have fallen into depression after leaving their activity, and questions like 'what do I do now?' come to mind. Thanks to them I have been able to redirect and find what I wanted to do after the rhythmic.», she points out.

Even now, immersed in her stretching classes, Timofeeva remains linked to the sport of her life:

«When we were confined by Covid-19, I felt that I could not just leave rhythmic gymnastics like that, so I chose stretching because it is the basis of this sport. and, since I have sucked it, I feel that I can transmit a lot. The good thing about this sporting activity is that it does not understand age or sex, much less rivalries. It is a new concept of training based on flexibility to stay active, get fit in a more functional way, improve the mobility of the whole body and prevent injuries, arthritis or osteoarthritis, among others.», she indicates.

Although her stretching classes are barely a month old, the athlete is focused on growing professionally:

«At the moment I teach classes three times a week at Barrefit, in Barcelona, but the idea is to bring this discipline to all parts and that it be taught more times per week. It's a good way to have fun while you get fit.»

We already know that having flexibility is important, but stretching also relaxes the muscles and helps with stress levels. «On a mental level it de-stresses,» she says. For those who are already thinking of starting in this discipline, Natalia divides her classes into warming up from head to toe and then specific exercises to work different points of the body, and although her classes are currently in person, very soon we will be able to follow them from anywhere.

As she says, she would also like to «try to change gymnastics from below, from the base», and thus ensure that this sport is valued more, has greater visibility and supports all those gymnasts who, like her, have needed at some point. a bra to get up again.

The early riser, God makes you see this piece of video I made with @nataliagtimofeeva last night in Sitges. I told him, Nat, I have a half crazy idea HAHA, I don't doubt it and he said LET'S DO IT! It was just magical to see how talented this woman is.

As I said a few days ago, on World Mental Health Day, I am very happy and grateful to be able to be 100% recovered and to be able to continue enjoying this sport in all its areas.

This year, I have several projects on my hands, and I am excited to share the first one with you.

As many of you know, I was born in Terrassa, a city where rhythmic gymnastics is barely known today. And being from there, I couldn't let this keep happening.

So together with my mother and my team of trainers, we have opened a very nice project.

Starting with the little ones, which is to instill rhythm and all its values in all the schools in our town. To be able to give knowledge from the base, with a solid projection for the future.

I will continue touring the world with this sport.

And lastly, I am also especially excited to share that in the coming months I will be in Mexico and Japan for my next masterclasses for the first time!!! THANK YOU for continuing to accompany me.

«The one who gets up early, God makes them see this piece of video that I made with @nataliagtimofeeva last night in Sitges. I told him, Nat, I have…”

Natalia García Timofeeva, gymnast, rhythmic gymnastics, spanish
—
141
Spain
Tweet
RSS
No comments yet. Be the first to add a comment!
Log in or Register to write comments
Related