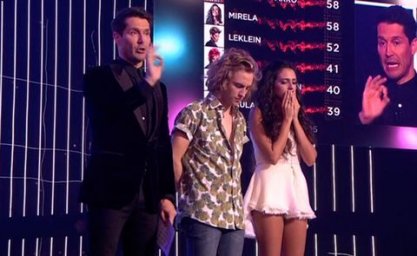 Mirela was born on July 31, 1990. She is from Madrid, she lives in Aranjuez. Despite only being 16 years old, she has extensive experience in the world of music.

From a very young age, she performed in front of the clients of her mother's shop. Music has been her passion since she was very little. She participated in the “Veo Veo” contest, winning the first Quo prize from the community of Madrid and the second Quo prize from Spain.

In addition, he participated in the Eurojunior 2004. Mirela participated with the songs «I met love» and «Yes or no». As we all know, the victory went to Maria Isabel who later won the Junior Eurovision Song Contest.

After the contest, Mirela has continued working. Last year she has worked in the musical «Piter Pan», she was the protagonist Wendy.

According to her fan club, Mirela will participate in the first Eurovision Mission program. Look at her when she manages to pass the casting, she will be present on the program on January 9.

Mirela, in 'What a happy time!': «My record company is taking action»

The controversy regarding the Eurovision Song Contest continues. This time Mirela, second for the third time in a Eurovision pre-selection, went to 'What a happy time!', a program by Maria Teresa Campos on Sundays, at least for now, on Telecinco.

After singing the song that could have led to the European song festival, 'Contigo', she commented to the host of the program that her record company is taking action on the controversy that has arisen and that she can only feel grateful for the support she is receiving of all the world.

The third time is the charm, or not

Mirela was born in Madrid in 1990. She became known in the second edition of 'Eurojunior' in 2004, she participated two years later in 'Gente de primera' where her performances covering divas of the song, such as Céline Dion or Mariah Carey, were highly applauded by the jury, finishing second behind Nauzet.

It was presented for the first time ten years ago to a Spanish national final for the festival: 'Eurovision Mission'. With her song 'La reina de la noche' she was in second position against D'Nash and hers 'I Love You mi Vida', composed by Rebeca and Tony Sánchez-Ohlsson. Two years later she tried her luck again in 'El retorno', but she couldn't face the two favorites Soraya and Melody, being relegated to fourth place.

The singer reappeared in 2012 in the first edition of 'La Voz' on Telecinco. Her interpretation in the blind auditions earned her entry into the Melendi team, where she coincided with Maika Barbero and Paula Rojo. Her first single after leaving the program was 'Soy como soy', which served as an anthem for the Mr Gay Pride contest.

Mirela returned the illusion, wanting to fulfill the saying that the third time's the charm, but in the end it could not be, and that Javier Cárdenas has asked that Manel Navarro resign «cavalierly» so that she finally come. Giving up is for cowards and I'm sure Mirela will succeed one day, and if not, take Claudia Faniello, the next Maltese representative, as an example, who has succeeded after nine attempts.