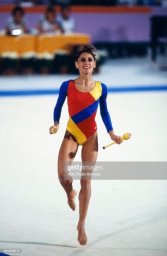 A document that is worth gold comes into our hands in which tve carries out, on the occasion of the World Cup to be held in Valladolid, a broadcast of a full day with the individual and group national team, training and exhibition included. In this report we can see how Emilia not only corrects the gymnasts but how she is in constant dialogue with the pianist, indicating nuances, dynamics or tempo. Remember that the pianist accompanied the gymnasts live. Little by little we will show you who was the team selected for the legendary Valladolis 85 World Cup.

Tribute to the Spanish gymnast Marta Cantón i Gutiérrez

Trained by Emilia Boneva, with whom she had a very trusting relationship, she was the first Spanish woman in all sports disciplines to achieve an Olympic diploma, finishing sixth in the Olympic Games in Los Angeles (United States, 1984).

A very sensitive gymnast, very fast in execution, she interpreted the character of the music very well; She had very good musical adaptations and included a lot of risk with the apparatus in her exercises. She was a European finalist with the ribbon (ranked eighth in Vienna, Austria 1984) and world finalist with the rope (fifth ranked in Valladolid, Spain 1985).

In the section of special mentions to Spanish gymnasts in the book Pinceladas de Rítmica we talk about them. Thank you very much Marta, for your love, sympathy and kindness with us. Always thanks.

She was born in Barcelona in 1965. In 1984, at the Los Angeles Olympic Games, she achieved sixth place, thus becoming the first Spanish athlete to win an Olympic diploma. In 1982 and 1984 she was absolute champion of Spain in individual mode.

Marta Cantón, gymnast, rhythmic gymnastics
—
140
Spain
Tweet
RSS
No comments yet. Be the first to add a comment!
Log in or Register to write comments
Ads