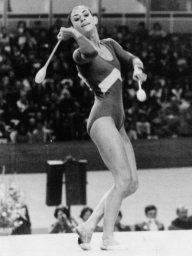 In the 1975 World Cups held in Madrid, he won four medals, which popularized an incipient discipline. No one has matched it yet.

María Jesús Alegre, during the Artistic Gymnastics World Championship that was held in Madrid in November 1975. She would win four medals, including bronze overall.

When writing in depth about the history of Spanish rhythmic gymnastics, it will be possible to say without error that everything began with it. And she is María Jesús Alegre Etayo (Madrid, 1957), whom everyone calls Chus, the first Spaniard to stand on a podium in a World Championship, the first to make this sport popular in Spain at a time when women still did not add so many victories to Spanish sport.

And with it began the long career of this specialty in our country, but in the seventies it was still a sport with little prestige because it originally came from Russia and Bulgaria, the two dominant powers.

The fact is that with Félix Fernández as president of the Spanish Federation, well-connected in Eastern European countries because at that time the industrialist was very close to Real Madrid, the International Federation granted Spain the right to organize the 1975 Rhythmic World Cup. And in Spain there was no house at all.

The first thing was to hire a prestigious coach, the Bulgarian Ivanka Tchakarova, quite a character and a peculiar woman, with a lot of character, temperamental, but very interesting. Ivanka created the base of the Spanish rhythmic, gymnasts, coaches, judges. The pioneers of that time, who later made Spanish rhythmic great, bear her mark.

Tchakarova would see something in Maria Jesús Alegre, who at the age of 17, in 1974, who until then had only practiced ballet, who opted for her at a time when there were only two clubs in Madrid, the Cuartel de la Montaña, that of our protagonist, and the Moscardó.

Runner-up in Spain in the first year, in 1974, behind Begoña Blasco and tied with Africa Blesa, the three formed the individual team for the World Cup in Madrid. The group was going to be formed by Marilín Such, Maria José Rodríguez (in the eighties I worked as an assistant in the group), Herminia Mata, Carmen Lorca, Maria Eugenia Rodríguez and Leticia Herrería, with Carmen Algora (she would become president of the Spanish Federation) Tchakarova's assistant.

The World Cup in Madrid was to open on November 20, 1975, a Thursday, with an adulterated competition and problems due to the convulsive national political situation, due to the last ones executed by Franco. Well, the death of the dictator the same day it started forced a change in the entire protocol: the World Cup was delayed, which was scheduled from Thursday to Sunday, and as a result of the three days of official mourning the entire Championship was compressed into two days, Sunday and Monday.

And it was a success: María Jesús Alegre won four medals for Spain: silver in clubs, and bronze in general, ball and clubs. The group also hung the bronze, and Begoña Blasco on tape. Curiously, forty years after that World Cup, the new gymnasts, who have followed their lives in different directions, continue to see each other «making the effort, to maintain friendship, once a year somewhere», and they spend a week together. And without talking about gymnastics precisely.

It can well be said that those medals, which later had media support on television, in the only one that existed at the time, helped to popularize this gymnastic discipline with María Jesús Alegre as its greatest exponent, and that she would have Susana Mendizábal as her successor.

Champion of Spain in 1976 and 1977, Maria Jesús participated, without so much luck, in the World Cup in Basel, where she was left without finals by placing 21st. But the goal, which was to be her farewell, was the 1978 European Championship., which was going to be held in Madrid, too, and all the advertising posters used his image, although he did not participate. During the month of vacation she got pregnant, and she left gymnastics, in what was a small internal scandal that was not wanted to be aired because at that time Spanish gymnastics had a very conservative tone. It was an early farewell to active competition, but Maria Jesús has continued in gymnastics.

With her husband, the athlete and later athletics coach Oliván (veterans world runner-up this year), she settled in Aranjuez, where she began working in gymnastics, at the City Hall, where she is hired as permanent discontinuous staff at the head of the Municipal School, nine months a year. She also worked for a while in the National Team, but it was not a time when the salary from the Federation allowed a young couple to get ahead.

Mother of three children, athletes, now boasts that she is a young grandmother. Alejandro, the oldest of the three, combined basketball with athletics; Jesus, athletics with soccer; and Silvia, the youngest of the three, with the rhythm until she said enough.

Maria Jesús is the Spanish individual gymnast with the most medals in World Championships. None of her successors have been able to match her, and she can also boast of having been an individual and a joint player, because in the 1977 World Cup she doubled for the sports needs of Spain.

María Jesús Alegre Etayo, Chus, rhythmic gymnastics, gymnast
—
108
Spain
Tweet
RSS
No comments yet. Be the first to add a comment!
Log in or Register to write comments
Ads